There’s always loads of books I want to read. It’s pretty much a list that I’ll never get to the end of. But every season there are new releases on the horizon that automatically jump to the very top of my list and for the remainder of the year, these are my top five can’t wait to get my hands on them, titles.

A Spark of Light by Jodi Picoult

As a long time Jodi Picoult fan, each new release of hers is one I eagerly anticipate, long before I even know what the topic of the novel will be. Releasing in October, at least I won’t have to wait long for this one, which promises to be quite a powerful read.

When Vonita opened the doors of the Centre that morning, she had no idea that it would be for the last time.

Wren has missed school to come to the Centre, the sole surviving women’s reproductive health clinic in the state, chaperoned by her aunt, Bex. Olive told Peg she was just coming for a check-up. Janine is undercover, a pro-life protester disguised as a patient. Joy needs to terminate her pregnancy. Louie is there to perform a service for these women, not in spite of his faith, but because of it.

When a desperate and distraught gunman bursts into the Centre, opening fire and taking everyone hostage, Hugh McElroy is the police negotiator called to the scene. He has no idea that his fifteen-year-old daughter is inside.

Told in a daring and enthralling narrative structure that counts backward through the hours of the standoff, this is a story that traces its way back to what brought each of these very different individuals to the same place on this fateful day.

Jodi Picoult – one of the most fearless writers of our time – tackles a complicated issue in this gripping and nuanced novel. How do we balance the rights of pregnant women with the rights of the unborn they carry? What does it mean to be a good parent? A Spark of Light will inspire debate, conversation … and, hopefully, understanding.

The Turn of Midnight by Minette Walters

The Turn of Midnight is the sequel to The Last Hours which released in November of last year. I thoroughly enjoyed The Last Hours but it really left readers hanging at the end, so this one can’t come too soon! Lucky for me, I have an advanced copy ready and waiting and come school holidays the week after next, this is one I am definitely reading ahead of time.

As the year 1349 approaches, the Black Death continues its devastating course across England. In Dorseteshire, the quarantined people of Develish question whether they are the only survivors.

Guided by their beloved young mistress, Lady Anne, they wait, knowing that when their dwindling stores are finally gone they will have no choice but to leave. But where will they find safety in the desolate wasteland outside?

One man has the courage to find out.

Thaddeus Thurkell, a free-thinking, educated serf, strikes out in search of supplies and news. A compelling leader, he and his companions quickly throw off the shackles of serfdom and set their minds to ensuring Develish’s future – and freedom for its people.

But what use is freedom that cannot be gained lawfully? When Lady Anne and Thaddeus conceive an audacious plan to secure her people’s independence, neither foresees the life-threatening struggle over power, money and religion that follows.

I have heard a lot of good things about this novel and it’s Kate Atkinson, so what more is there to say?

In 1940, eighteen-year old Juliet Armstrong is reluctantly recruited into the world of espionage. Sent to an obscure department of MI5 tasked with monitoring the comings and goings of British Fascist sympathisers, she discovers the work to be by turns both tedious and terrifying. But after the war has ended, she presumes the events of those years have been relegated to the past forever.

Ten years later, now a producer at the BBC, Juliet is unexpectedly confronted by figures from her past. A different war is being fought now, on a different battleground, but Juliet finds herself once more under threat. A bill of reckoning is due, and she finally begins to realize that there is no action without consequence.

Transcription is a work of rare depth and texture, a bravura modern novel of extraordinary power, wit and empathy. It is a triumphant work of fiction from one of this country’s most exceptional writers.

The Pearl Thief by Fiona McIntosh 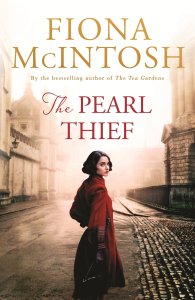 I always love a new Fiona McIntosh, her novels are a cut above in my opinion. They don’t call Fiona a master story teller for nothing!

Severine Kassel is asked by the Louvre in 1963 to aid the British Museum with curating its antique jewelry, her specialty. Her London colleagues find her distant and mysterious, her cool beauty the topic of conversations around its quiet halls. No one could imagine that she is a desperately damaged woman, hiding her trauma behind her chic, French image.

It is only when some dramatic Byzantine pearls are loaned to the Museum that Severine’s poise is dashed and the tightly controlled life she’s built around herself is shattered. Her shocking revelation of their provenance sets off a frenzied hunt for Nazi Ruda Mayek.

Mossad’s interest is triggered and one of its most skilled agents comes out of retirement to join the hunt, while the one person who can help Severine – the solicitor handling the pearls – is bound by client confidentiality. As she follows Mayek’s trail, there is still one lifelong secret for her to reveal – and one for her to discover.

From the snowy woodlands outside Prague to the Tuileries of Paris and the heather-covered moors of Yorkshire comes a confronting and heart-stopping novel that explores whether love and hope can ever overpower atrocity in a time of war and hate.

The Moon Sister by Lucinda Riley 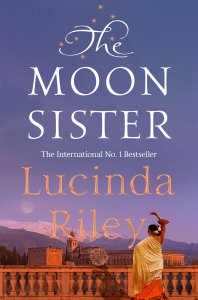 The Moon Sister is book 5 in The Seven Sisters Series, and I am very much looking forward to this one. Each previous book ends with an opening chapter for the next one and Tiggy’s opening chapter was positively explosive. Plus, she’s a really nice sister and I’m keen to see where Lucinda takes her.

Tiggy Aplièse is doing the job she loves; working at a deer sanctuary up in the raw beauty of the highlands of Scotland. When the sanctuary has to close, she is offered a job on the vast and isolated Kinnaird estate as a wildlife consultant by the elusive and troubled Laird, Charlie Kinnaird, she has no idea that the move will not only irrevocably alter her future, but ironically, bring her into contact with her past. She meets Chilly, an ancient gipsy, who has lived for years on the estate, having fled from Spain seventy years before. He tells her that not only does she possess a sixth sense, passed down from her gipsy ancestors, but it was foretold long ago that he would be the one to send her
back home.

It is 1912 and, in the pitifully poor gipsy community that have been forced to make their homes for hundreds of years outside the city walls of Granada in the seven caves of Sacromonte, under the shadow of the magnificent Alhambra Palace, Lucía Amaya-Albaycin is born. Destined to be the greatest flamenco dancer of her generation, La Candela – as she is named, due to the inner flame that burns through her when she dances- is whisked away by her ambitious father at the tender age of ten to dance to his guitar in the flamenco bars of Barcelona. Her mother, Maria, is devastated by the loss of her daughter, and as civil war threatens in Spain, tragedy strikes the rest of her family.
Now in Madrid, Lucía and her troupe of dancers are forced to flee for their lives, their journey taking them far across the water to South America and eventually, to North America and New York itself – Lucía’s long-held dream. But to pursue it, she must choose between her passion for her career and the man she adores.

As Tiggy follows the trail back to her exotic but complex Spanish past, and – under the watchful eye of a gifted gypsy bruja – begins to accept and develop her own gift, she too must decide to whether to return to Kinnaird, and Charlie.

What books are you anticipating the most over the next few months?