The Psychology of Time Travel… 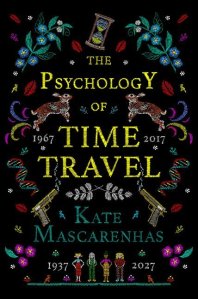 1967.
Four female scientists invent a time travel machine. They are on the cusp of fame: the pioneers who opened the world to new possibilities. But then one of them suffers a breakdown and puts the whole project in peril…

2017.
Ruby knows her beloved Granny Bee was a pioneer, but they never talk about the past. Though time travel is now big business, Bee has never been part of it. Then they receive a message from the future – a newspaper clipping reporting the mysterious death of an elderly lady…

2018.
When Odette discovered the body she went into shock. Blood everywhere, bullet wounds, that strong reek of sulphur. But when the inquest fails to find any answers, she is frustrated. Who is this dead woman that haunts her dreams? And why is everyone determined to cover up her murder?

A murder mystery that crosses the barriers of time, both in its execution and its investigation. What an intriguing premise, and combined with the quaint cover with its cute stitching alluding to all things the opposite of quaint, I knew this was a debut I did not want to miss. From the opening pages, The Psychology of Time Travel has a crisp narrative, a lack of ambiguity, and a terrific pace that has you slipping back and forth through time with ease. I’m not given to reading much science fiction, it’s usually only when combined with another genre, such as historical, that I tend to find myself reading it. It’s rarely deliberate. But for the last few years I have been obsessed with the television series 12 Monkeys, which is all about time travel, so that topic in itself has pierced my science fiction bubble. I won’t get carried away and say that I’m a convert, but if it’s about time travel, I’m open to it.

When this novel opens, we meet four brilliant women who have invented time travel. They’re just in the final stages of perfecting it. These women are close, they live together, work together, share every aspect of their lives as they work as one in the pursuit of their goal. When the breakthrough comes, Barbara overdoes it, burning the candle at both ends as well as becoming a bit addicted to taking short trips through time. She has a breakdown on national television, and to preserve the integrity of time travel, the other three women distance themselves from Barbara. Margaret, the most domineering of the women, rises to the fore, and over time, she heads the time travel corporation, Conclave. In short, Margaret is a megalomaniac. She’s not a very nice woman. Nor is she well liked. Barbara struggles with her mental health for her entire life, but while she knows time travel is a trigger for her, she still misses it, and a note from the future sets her desire to reconnect back in motion, although it doesn’t take long for her to realise that time travel is now far removed from what she invented all those years ago. It’s big business now, an empire unto itself, and if truth be told, it’s a little scary as well.

‘Barbara’s perception of time travel had been formed before the Conclave was born or thought of. In those early days, Margaret had been one member of a team where everyone’s input was essential, so her personal qualities didn’t dominate. This meant that the eventual character the Conclave took on came as a shock to Barbara when she tried, at the age of eighty-two, to return. She had the strength to walk away, but she was also glad she’d had the chance to see behind the wizard’s curtain…
In another life she had invented time travel – but that was no longer a glory she needed to revisit.’

The idea of time travel just being an ordinary part of life is such a head spin. There are people who work for Conclave as time travellers, for all sorts of purposes from investigating crime to providing health care from the future through to propagation of new plant species. The list is endless. Is it for good? Debatable, as in the end, it’s primarily a business. Barbara approaches Margaret with a plan for lowering fuel consumption but as Margaret points out, the fuel is a core element of their business. It might be safer to use less, but it’s not good business sense in terms of profit margins for the fuel industry. Like so many things that start out good with science, someone always has to get too big for their boots and move into taking over the world territory. In this case, that would be Margaret. But it’s not without its cost to her in the end. There’s a limit, even when spread over the infinity of time, on how many people you can get offside before bearing the weight of their wrath.

To a more sinister side of time travel, this novel examines the human cost, on the actual time travellers themselves. Imagine living your life across time, constantly having to adjust to different eras, people you know and love alive in one era but dead in the next, never even thought of in another. The burden of doing something to cause a paradox, unwittingly wiping a person you love from existence, or causing some other ripple of change; at the very least, for the resilient, it would be taxing. For others, the strain would be permanent. Prompted by Barbara’s initial breakdown, Margaret puts measures into place to ensure there is never a repeat. It’s not that she cares a fig about the time travellers mental well being; no, for Margaret, it’s all about ensuring no further public demonstrations of poor mental health caused by travelling through time. Because that would be bad for business. A series of checks are put into place, officially, along with some pretty nasty unofficial desensitisation ‘games’ aimed at getting new recruits to view death without being affected by it. It’s pretty grim, and quite awful at times, what new recruits are expected to do. It’s almost akin to taking the humanity out of the human. I enjoyed this analysis of the psychological effects on the minds of time travellers, it was thought provoking and highlighted just how murky things can get when people, as opposed to machines, are the main resource in play.

‘“Rituals,” Odette said in disbelief. “What are they for?”
“It’s for your benefit,” Fay said. “It accustoms you more quickly to being one of us. You’re not like them now. It’s better if you accept that as soon as possible.”
“But what’s in this ritual for you personally?”
Fay looked at Mr Montgomery, sobbing into his daughter’s tow hair.
“Sometimes,” Faye mused, “I like watching people have emotions I don’t feel anymore.”’

I really enjoyed the layout of this novel, the way the story unfolds. It does slip back and forth through time, pretty rapidly, but everything is so concisely connected. For a rather complicated story, it’s told in an incredibly uncomplicated fashion. As the events move forward, the tension mounts and the pacing increases. The Psychology of Time Travel is a gripping read, enthralling and entertaining, and ever so slightly plausible in a freaky kind of way. It’s an impressive debut and one that I recommend highly.

Thanks is extended to HarperCollins Publishers Australia via NetGalley for providing me with a copy of The Psychology of Time Travel for review.

Kate Mascarenhas is a half-Irish, half-Seychellois mid-lander. She has worked as a copywriter, an assistant psychologist, and a bookbinder. She lives with her husband in a small terraced house which she is slowly filling with Sindy dolls. This is her first novel.