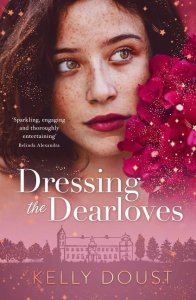 One crumbling grand manor house, a family in decline, five generations of women, and an attic full of beautiful clothes with secrets and lies hidden in their folds. Kelly Doust, author of Precious Things, spins another warm, glamorous and romantic mystery of secrets, love, fashion, families – and how we have to trust in ourselves, even in our darkest of days. One for lovers of Kate Morton, Belinda Alexandra, Fiona McIntosh and Lucy Foley.

Failed fashion designer Sylvie Dearlove is coming home to England – broke, ashamed and in disgrace – only to be told her parents are finally selling their once-grand, now crumbling country house, Bledesford, the ancestral home of the Dearlove family for countless generations.

Sylvie has spent her whole life trying to escape being a Dearlove, and the pressure of belonging to a family of such headstrong, charismatic and successful women. Beset by self-doubt, she starts helping her parents prepare Bledesford for sale, when she finds in a forgotten attic a thrilling cache of old steamer trunks and tea chests full of elaborate dresses and accessories acquired from across the globe by five generations of fashionable Dearlove women. Sifting through the past, she also stumbles across a secret which has been hidden – in plain sight – for decades, a secret that will change the way she thinks about herself, her family, and her future.

Romantic, warm, and glamorous, moving from Edwardian England to the London Blitz to present day London, Dressing the Dearloves is a story of corrosiveness of family secrets, the insecurities that can sabotage our best efforts, and the seductive power of dressing up.

I so enjoyed Dressing the Dearloves as it contains many of my favourite themes woven into its story: fashion, an old crumbling English estate, a few family secrets, a story that dips into the past, and a later than usual coming of age. Kelly Doust has such a warm writing style, witty and absorbing, as though you are a fly on the wall in these characters lives. Dressing the Dearloves is a comfortable novel, for want of a better description, a little slice of literature you want to crawl into. It’s sparkling and fun and has all the feels at all the right moments.

Sylvie Dearlove has returned home to lick her wounds and do her best to hide her fashion business failings from her family. She’s ashamed, not doing too well with her health, and she’s nursing a guilty conscience about quite a few things. When she arrives back at her family’s historic estate after a six year absence, it’s to find it extremely run down with her parents doing barely there patch up jobs in order to put it on the market. Now, I’ll pause here and insert a screenshot I took of the for sale advert for the estate included in the novel: 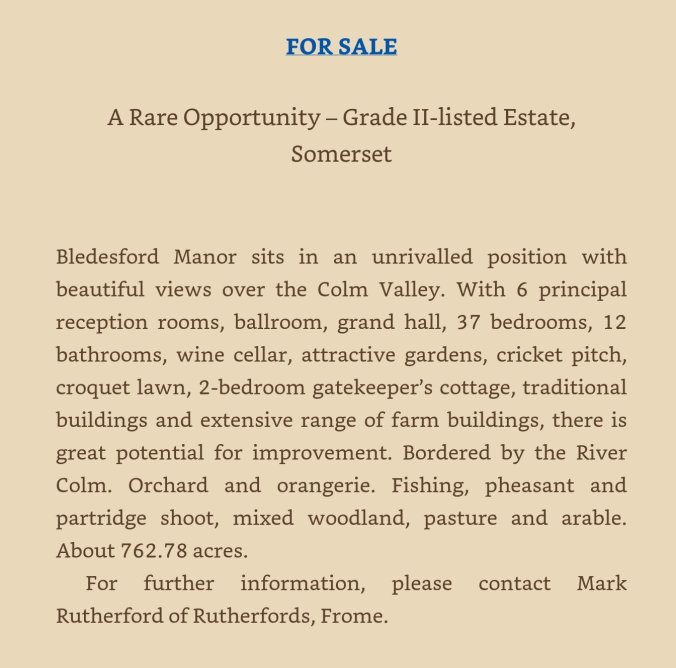 What a house! It seems incredible that a family would have ever thought they needed so much space. And when you consider the historical aspect, that some of these houses were built as far back as the 1600s, then the value of saving them is significant. Some have architectural and/or garden designs from historically noteworthy figures. And then there’s what these houses contain, in terms of artefacts and antiquities. I love this sort of thing, although I do have a hard time wrapping my head around the money that some families must have had down through time and the means by which they sourced it in order to have afforded all of this. For families who have these houses today, the maintenance is beyond most financial means, the taxes are crippling, selling an estate rarely wipes the debt because there are so many taxes associated with it; and in the end, old English estates are no longer tied up with old English wealth, so the owners can realistically be living in grand poverty, contained to a few rooms while vermin invade the rest. Historically, it’s certainly a loss for the English countryside. There is a push on listing estates with the National Trust so that owners can turn them back into working estates with a tourism/event/cottage market/tea house focus. It’s a brilliant idea but means a lot of hard work and only suits families who really want to hang on to their heritage, and who also have an estate that is historically noteworthy in some quantifiable manner.

“Sylvie looked down, far out over the Colm Valley, and shook her head. What a legacy this place was. Not perfect, but something worth saving. Funny, she used to feel the opposite; now she was utterly petrified they were going to lose it.”

For the Dearloves, there is a certain social history aspect attached to their estate because the family have been well known down through time as ‘society folk’. When Sylvie’s mother Wendy asks her to get stuck into cleaning out the attic, Sylvie unearths a wealth of fashion history. Now, this gave me goosebumps, because these were extremely wealthy women back in the day, trendsetters for the English upper class scene, so these are not ordinary clothes and they span decades, with original couture and famous pieces that can be traced back to monumental moments captured in paintings and society photographs. For Sylvie, going through these clothes becomes a real turning point for her. She lives and breathes fashion, but desperately needs a new career focus. It’s all just a matter of joining up the dots and having a little faith, trust and pixie dust…in the form of some focused friends who know just when to push Sylvie’s motivation buttons.

“She finally began to understand where her passion for clothes and dressmaking had been born – it was stored in her very blood. Somehow it gave Sylvie the confidence to know she was on the right path after all.”

The three lynchpins of this novel are the estate, the vintage clothes collection, and the family itself. The Dearloves are very much a family of matriarchs, with great-grandmother Lizzie at the helm, despite being on her deathbed. While I’m loathe to normally dislike an ailing woman in her 90s, with Lizzie, it was unavoidable. Through well timed slips back to the 1920s and 1940s, along with the present day, we are able to form a fairly complete picture of Lizzie, and honestly, it wasn’t pretty. So twisted by her own spite and jealousy, bitter about never being everyone’s favourite, and obsessed with class to the point of surpassing snobbery, she was as toxic as they come. But the story itself, of these women and what had unfolded within their lives, was incredible, and so sad too. This family was so bad at communication, saying things when they shouldn’t and withholding the things they needed to impart. I really enjoyed seeing Sylvie unravel all of this with her parents and her grandmother Gigi, airing everything out in order for them all to begin afresh. And one of the most beautiful things to have come out of this emotional declutter was Sylvie’s realisation that her grandmother Gigi is a wonderfully wise woman and she almost missed knowing it, being too wrapped up in Lizzie’s grandiose and outdated snobbery. There’s a couple of poignant secrets that comes to light and another that remains hidden, and all in all, I adored this family’s story.

“Sylvie lingered for a moment on the landing to look at the portrait of Rose. All that success she’d been chasing in her life, Sylvie thought ruefully, all the effort she’d expended, to project the perfect image, to create the perfect life, striving to live up to the legacy of those perfect, impressive Dearloves – Rose, her father, even Gigi – and it had all been for nothing. Such a pointless way to live. They weren’t perfect, they were flawed, messy people in complicated situations, just doing the best that they could. Sylvie looked up at Rose’s portrait, and where before when she looked at it all she could see was cool composure and mocking regard, now she thought the expression on her great-great-grandmother’s face was of sympathy and understanding.”

Dressing the Dearloves is a novel that is arranged in a very engaging layout. Present day chapters alternate with those from the past, but interspersed between these are old news clippings from society pages, current news stories on Sylvie’s failed career, articles on country life from bygone days featuring the Dearlove family, letters and diaries, excerpts out of memoirs – a whole host of information presented in different formats designed to give an alternate perspective, yet complete picture, of this story. It was incredibly well done. I highly recommend Dressing the Dearloves to those who love their novels draped in fashion, steeped in the atmosphere of old estates, with a smattering of family secrets to uncover. Brilliant, warm, witty, and beautiful!

Thanks is extended to HarperCollins Publishers Australia via NetGalley for providing me with a copy of Dressing the Dearloves for review.

Since 2009, Kelly Doust has published five non-fiction books about craft and fashion: THE CRAFTY MINX, THE CRAFTY KID, A LIFE IN FROCKS: A MEMOIR, MINXY VINTAGE (all Murdoch Books) THE CRAFTY MINX AT HOME (HarperCollins). She has a background in book publishing and publicity, and has worked in the UK, Hong Kong and Australia and freelanced for magazines such as Vogue, Australian Women’s Weekly and Sunday Life Magazine. She currently lives in Sydney, Australia with her husband and daughter.