This Child of Ours… 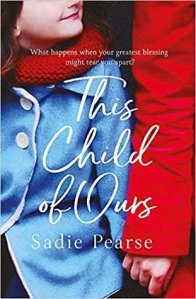 You know what’s best for your child. Don’t you?

Riley Pieterson is an adventurous girl with lots of questions. There’s plenty she doesn’t know yet; what a human brain looks like. All the constellations in the night sky. Why others can’t see her the way she sees herself.

When Riley confides in her parents – Sally and Theo – that she feels uncomfortable in her own skin, a chain of events begins that changes their lives forever. Sally wants to support her daughter by helping her be who she dreams of being. Theo resists; he thinks Riley is a seven-year-old child pushing boundaries. Both believe theirs is the only way to protect Riley and keep her safe.

With the wellbeing of their child at stake, Sally and Theo’s relationship is pushed to breaking point. To save their family, each of them must look deeply at who they really are.

A story of a marriage in crisis and a child caught in the middle, this is a beautiful novel of parents and their children, and how far we’re prepared to go in the name of love.

In terms of thought provoking fiction, it doesn’t get more thought provoking than the content covered in This Child of Ours. If I’m completely honest, gender dysphoria (the condition of feeling one’s emotional and psychological identity as male or female to be opposite to one’s biological sex) within children is not something I’ve dwelled on to any degree. With each of my children, my girl has right from the start been a girly girl while my boys have both been boyish boys. Being a household with both boys and girls ensured that each had a choice over what toys they wanted to play with, and there were plenty of times my daughter pushed trucks around while my sons carried dolls wedged under their armpits. But when it came to clothes, and picking things out for themselves, each of them gravitated to gender specific items. I’ve never once thought to myself, ‘what would I do if my child wanted to be the opposite of what they are?’ I’ve never even encountered it with friends, although my daughter did go to primary school in her early years with a girl who kept her hair short and wore the boy’s uniform. But this girl still identified as a girl and still had a girl’s name; maybe she was wanting to be a boy or maybe she was a tomboy, I don’t know. To us, she just was who she was and we liked her that way. Her friends were all girls and she never missed a birthday party or playdate.

I felt an instant affinity to both Sally and Theo, the parents at the centre of this novel. While they viewed their daughter as a tomboy, she was still their daughter, and they didn’t sit around musing on the idea that she might actually want to be a boy. Who does? But Riley, at the age of seven, tells her mother she is a boy. Not that she wants to be one, but that she is one. That her body is wrong. It’s a heartbreaking scenario and I felt quite able, under the guiding hand of Sadie’s sensitive handling of this terrain, to see both sides of the story. In a nutshell, while both parents are shocked and distressed by this situation they now find themselves in, their reactions and subsequent actions differ. Sally feels a strong need to support Riley. She’s with her more than Theo and witnesses Riley’s daily distress over not being able to be the person she really feels she should be. Theo wants to ignore it, Riley is only seven after all, and what if it’s just a faze, which given her age, is a plausible likelihood. My own view fell somewhere in the middle, but it was only through Sadie’s meticulous presentation of both Sally’s and Theo’s viewpoints that I was able to arrive at this point.

Sally seemed to me to really jump the gun. After only consulting a GP and getting a very loose impression on what might be occurring with Riley, she seemed to just go from A to Z without pause and reflection for every step of the way. It was interesting to note how Sadie dealt with perception throughout this novel and the visit to the GP is an excellent example of this. Sally heard one thing while Theo heard another. And this really typified their handling of Riley’s situation from the outset. I could really appreciate where Theo was coming from though. He seemed to have a better grasp on the bigger picture than Sally. For Sally, it was more about the immediate, making Riley happy, yet for Theo, it was about the future and how vastly this would change for Riley if she became a boy. It was about more than wearing boy’s clothes and using the boy’s toilets. And herein lies my problem with how Sally chose to handle it. I really feel that given Riley’s young age, and her being pre-pubescent, that she should have been digging deeper, working with a child psychologist to ensure that Riley fully understood that what was being set in motion was far greater than wearing transformers underwear and using the boy’s toilets at school. It rattled me to consider that a parent wouldn’t do more to be sure, given the enormity of changing gender. I was somewhat disappointed that the GP didn’t refer them on, given her initial impressions of Riley. It’s a worry that medical professionals may inadvertently downplay a situation like this. My view is that this process would require intense support and consultation at every step of such an unknown journey.

It was so sad to see Sally’s and Theo’s marriage fracture under the pressure of this situation. We meet them at the start as a loving and close unit. Everything that unfolded between them seemed entirely plausible to me. This would be such a difficult situation to navigate through, dealing with your own shattered preconceived notions, trying to work out what’s the best thing for your child, and trying to be on the same page as your partner as well as offering them support. Both of these characters had many opportunities for introspection and Riley’s journey was as much about Sally and Theo reordering their own perceptions and beliefs along the way, an aspect of the story I appreciated enormously. I also felt rather sad for Theo’s parents. They are of a different era, and I could totally understand their distress over Riley’s decision. I didn’t agree with Theo’s father’s actions, but I certainly understood where they were coming from. Theo’s parent’s reaction was offered as a contrast to that of Sally’s father and step-mother, and this really mirrored the couple themselves. I appreciated how Sadie brought these perspectives in, stretching out beyond the immediate household and into the reactions of extended family, friends, and even the community. She highlighted just how far reaching these life changing decisions can be.

All in all, This Child of Ours was extremely well balanced, affording the reader all sides with the breathing space to make up your own mind, if you were so inclined. It is an ideal novel for book club discussion, you’d be hard pressed to find a more polarising choice to go back and forth over. Given the nature of the subject matter that forms the backbone of this story, there was a real risk of this novel having an agenda, but Sadie has skilfully avoided this trap and instead delivered a thought provoking and emotionally charged read that offers an opportunity for further contemplation.

Thanks is extended to Little, Brown Book Group UK for providing me with a copy of This Child of Ours via Netgalley for review.

A special thanks to the author for personally requesting me as a reviewer for her debut as Sadie Pearse.

Sadie Pearse lives in north London with her husband and two young children. This Child of Ours is her first book writing as Sadie Pearse. She has also written four novels as Vanessa Greene, and five novels as Abby Clements.

10 thoughts on “New Release Book Review: This Child of Ours by Sadie Pearse”

Reading, Writing and Riesling
Book Around The Corner

Books I read. Books I want to share with you.

The Newtown Review of Books

Adding to the lighter side of your TBR pile :)

What Cathy Read Next...