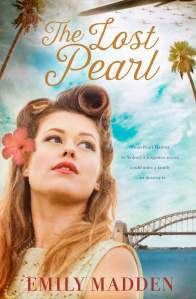 From Pearl Harbor to the shores of Sydney, a secret that spans generations could unite a family – or destroy it.

On the evening of her sixteenth birthday party, Catherine McGarrie wants nothing more than for the night to be over, even though the opulence of the ballroom befits the daughter of a US Navy Rear Admiral. Then she meets Charlie, a navy officer from the other side of the tracks, a man her parents would never approve of.

As rumours of war threaten their tropical paradise, Catherine and Charlie fall in love. But the bombing of Pearl Harbor on 7th December 1941 changes their lives forever.

Seventy–five years later, addled by age and painkillers, Catherine tells her granddaughter Kit her story and reveals the tale of a long–lost treasure. Can Kit uncover the secret and reunite her family? Or will the truth tear them apart?

The Lost Pearl takes us back to a time in history where the world was just on the cusp of war invading the Pacific region. We begin in Hawaii, in the months preceding the bombing of Pearl Harbour, and then travel to Australia, another island with its northern coast under attack. More than a war story, The Lost Pearl is an examination of the far reaching personal effects of war and the lingering consequences of regretful decisions made in a bygone era.

While by no means a unique story, with its dual timeline that has a granddaughter uncovering her grandmother’s past via investigating the curious dying words she was privy to, the way it all unfolded was very fresh and engaging. This is a story that clips along at a great pace, keeping you up late at night and eager to devour as much as you can in one sitting. Both timelines, with Kit in the present and Catherine in the past, equally held their own, tricky, as we all know, with dual timelines. Emily infused a great deal of symmetry between grandmother and granddaughter which went a long way towards ensuring her novel was a complete story rather than two loosely linked separate ones. I really loved the serendipitous link that Emily gives to Catherine and Kit. It was such a beautiful full circle to end up on, I appreciated it immensely but won’t elaborate further to avoid spoilers.

The history infused throughout The Lost Pearl was thoroughly authentic and stirred my emotions. From Hawaii to Australia, no stone was left unturned by Emily, she has achieved an historical fiction novel of a high calibre indeed. I appreciated the offering of multiple perspectives, particularly as we neared the end. It offered a more complete story and gave me an opportunity to quell my judgement on some of the characters. Although, even by the end, Catherine’s mother still didn’t sit well with me and I found William to be a disappointment that I wasn’t anticipating. This of course adds to the authenticity of the story overall – you can’t like everyone and every family probably has its more questionable members.

The Lost Pearl has much to offer lovers of historical fiction. The bombing of Pearl Harbour is not something I’ve read about in fiction all that much, although I learnt about it when studying WWII history and have of course watched the Hollywood rendition. Still, it’s not a piece of history that has been overwritten and I particularly appreciated Emily’s detailing of how the bombing is commemorated each year in a fashion similar to our ANZAC day. I was quite affected by the scenes where Kit was attending the 75th commemorations. I highly recommend The Lost Pearl, it’s a terrific read, well researched and impeccably written. There’s a natural flow to it that will make it hard for any reader to put down once they’ve picked it up.

Thanks is extended to Harper Collins Publishers Australia via Netgalley for providing me with a copy of The Lost Pearl for review. 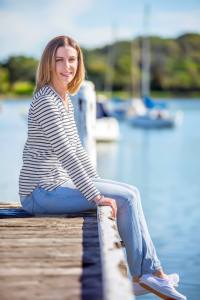 A self-confessed romance nerd, Emily Madden covets books like some women covet shoes and handbags (although she has a decent collection of each of those too!). Her love of books started at a young age and she would often go shopping with her mum just so she could score yet another novel. Nothing has changed – she rarely leaves a bookstore without a book. While she reads anything and everything, stories that touch the heart and uplift the soul are what she loves the most.
Emily wrote her first story at eight and was horrified when she was made to read it out aloud at her school assembly. She dabbled with poetry before returning to writing novels, albeit many years later. Emily lives in Sydney with her two girls and husband. She loves coffee and is forever frequenting her local coffee haunts. She has an unnatural obsession with needing to be close to the ocean, but is terrified of deep water.
You can email her at emilymaddenauthor@gmail.com, visit her website www.emilymaddenauthor.com or connect with her on Facebook www.facebook.com/emilymaddenauthor or Twitter @emaddenauthor.

In today's episode of #bookmail there was an audible gasp, some tears of joy, and an apology to all the other books on my shelves because your status will remain unchanged for the foreseeable future.
#newrelease ⭐⭐⭐⭐⭐ #bookreview up on the blog today! 📚☕ *link in bio to read full review*
Could he be anymore fast asleep? 😂