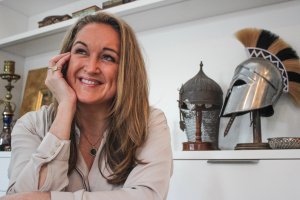 I’m delighted to bring you an adventure filled edition of Behind the Pen today, as I welcome Meaghan Wilson Anastasios with her new release, The Honourable Thief.

How would you describe The Honourable Thief if you could only use 5 words?

What provided the inspiration point for The Honourable Thief?

When I was working as an archaeologist, I heard about the downfall of a superstar of the archaeological world who Turkish authorities suspected of involvement in an antiquities smuggling ring. The truth of what really happened in the very peculiar chain of events that led to his expulsion from the country has never been determined, and as far as I was concerned, the truth didn’t really matter. What intrigued me about this tale was that it presented a case study of how hubris and ambition can undermine an otherwise remarkable human being, and this was the seed from which the story of The Honourable Thief sprouted.

Benedict Hitchens is an intriguing character. Was he already a firm picture in your mind before you started writing or did he develop a personality of his own as the story progressed?

Benedict has been occupying a penthouse apartment in my imagination for years, so I know him well. His personality grew from my interest in delving into the minds of characters like James Bond, Jason Bourne and Indiana Jones when they’re in their downtime. We’re all so accustomed to seeing larger-than-life male heroes who are put through the wringer, only to come out the other side, brush themselves off, and start all over again. But what do they do when something goes terribly wrong? So when we meet Benedict at the start of the book, he’s at his lowest ebb. His life’s a mess, and he’s simply not coping with it. As the story progresses, we learn more about his past and why he has been caught up in a self-destructive downward spiral and, ultimately, how he manages to find a path to redemption. But along the way, he does some things that are anything but admirable. So the trick was showing those moments while also making him a sympathetic character.

How much planning and research was involved with the Honourable Thief? Were you rigorous in your planning or did you just let the story and character traits evolve naturally as the writing progressed?

The historical research was extensive, exhaustive and loads of fun! It was informed by my plot which began as a very detailed, blow-by-blow, outline of the story I had in mind which had evolved during quiet moments; in the shower; driving; walking the dog. But once I started writing, I found characters and moments led me in different, and often quite unexpected directions, which involved a rethink of where I was headed. There were key plot moments and characters that never changed, but many did. So it was actually a very exciting and dynamic process, almost as if the story itself had a life of its own and was carrying me along with it.

With a character as an archaeologist and a background in archaeology yourself, are there any blurry lines between fact and fiction contained within The Honourable Thief? Any secret adventures that you might have had yourself that you’ve slotted in for us?

And don’t forget my background in the art auction world! Of course many moments in the book are inspired by my own experiences in those worlds, and characters based on the extremely colourful people who occupy them. Although I generally try to avoid direct involvement in antiquities theft, art forgery and grave robbing, I’ve certainly seen a thing or two in my time! I’ll leave it up to you to guess which passages might have some foundation in fact.

Are you balancing a different career with your writing? How do you go about making time for your writing within limited hours?

I’m fortunate in that my other career is freelance screenwriting, which means I can manage my time according to the demands of whatever project I’m working on at a given time. My day job is writing and researching for film and TV; most recently I co-wrote a series for Sam Neill for Foxtel, ‘The Pacific: In the Wake of Captain Cook’, and also wrote the book of the same name that accompanies the series. The biggest challenge is jumping between the various projects, because each requires a different voice. So to give my brain a chance to switch gear, I always schedule the ‘jump’ to be bookended by a clear (and usually mundane!) physical break from my desk – lunch, hang out the washing, walk to the shops. That kind of thing. Each week, I allocate specific blocks of time to work on my novel between my TV work, and set a word count to reach each day. If I don’t reach the target, then it’s back to the computer after dinner and no Netflix for me that night! But then I’d also grab any other windows available to me – I probably wrote about a third of The Honourable Thief on my laptop in the car while waiting for my son to finish football training and in a café while my daughter did her taekwondo classes.

Although most of my work is done at my desk, I can – and do – write anywhere. Seize the moment, I say. At a table in a café in a cavernous warehouse full of hysterical children bouncing on trampolines? Yes. Seated on a folding chair, trackside, during a Little Athletics championship? You betcha. Laptops are the greatest gift to the modern-day writer. Yes, yes, I know. There have always been pens and notebooks. But I’m now a fully committed electronic scribe. And I use my laptop everywhere.

What attributes do you think you need to remain sane as a writer? Are there any particular things you routinely do for yourself to maintain your own headspace?

Writing is a joy. I still find it hard to believe I get paid to do it – it doesn’t feel like work. So I’ve never been at risk of being driven insane by the process itself. The biggest challenge for my mental stability has been juggling the demands of my paid writing work and family commitments with finding time to write The Honourable Thief. That has required equal measures of discipline, good humour and adaptability. The other characteristic that I’m fortunate enough to have acquired that comes in handy is skin as thick as a rhino’s hide. I attribute it to my work as a scriptwriter, where feedback tends to be worded with the sensitivity and nuance of one of Donald J. Trump’s tweets. Positive criticism I take on board as exactly that – positive. When it comes from the right place, feedback is there to help, so I’m always open to it. But I think the most important thing for me personally is that I write for myself. I’m not writing with a particular audience or a specific outcome in mind; I want to tell stories that I’d like to read myself.
As for routines to maintain my headspace, I do a bit of meditation and quite pathetic yoga each morning to clear the cobwebs away, and love nothing more than a good, long walk to let the stories tick over in my mind.

Is there any other genre would you like to try your hand at writing and why?

I’d really love to have a go at suspense, largely because I have a cracker of an idea and the whole story plotted out in my mind already. Once I’ve told Benedict Hitchens’ story in his three books, The Honourable Thief being the first, followed by The Emerald Tablet, which is in Pan Macmillan’s hands now, and the as-yet unnamed but now underway third book, I may well embark on my thriller! Then again, I’ve a mental filing cabinet crammed full of brilliant stories in the historical fiction genre, so you never know. So many stories, so little time!

If you could sit down for an afternoon with an iconic person from history, who would you choose to spend that time with?

Now, this question is equal parts impossible and brilliant. You ask a historian to name just one notable person to spend an afternoon with? Colour my brain exploding right about now! OK – as a sworn agnostic, but one who believes the man known as Jesus Christ was a real person of flesh and blood, it would have to be him, if only to ask him what he thinks about the whole ‘Christianity’ thing. And provided I had time to learn Aramaic between now and then, because otherwise it would be a singularly frustrating encounter. 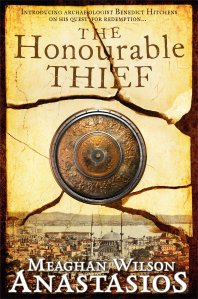 Benedict Hitchens, once a world-renowned archaeologist, is now a discredited – but still rather charming – shell of his former self.

Once full of optimism and adventure, his determination to prove that Achilles was a real historical figure led him to his greatest love, Karina, on the island of Crete and to his greatest downfall, following the disappearance of an enigmatic stranger, Eris.

He has one last chance to restore his reputation, solve the mystery of Eris and prove his Achilles theory. But it is full of risk, and possibly fatal consequences…

In her breakout novel, Meaghan Wilson Anastasios weaves an action-packed tale of honour, passion, heroes and thieves across an epic backdrop of history.

7 thoughts on “Behind the Pen with Meaghan Wilson Anastasios”