Your husband thinks your daughter’s an angel. You know different. She’s a monster.

On the outside it looks like Suzette has it all. A stunning ultra-modern home, designed by her handsome Swedish husband. A beautiful, but silent, seven-year-old daughter who is fiercely intelligent. But under the shiny veneer, the cracks are all too clear.

For her daughter Hanna isn’t just clever, she’s dangerous. Her behaviour is carefully calculated. She adores her father, yet wants Suzette to disappear. And as Hanna’s tricks become increasingly sophisticated – from tampering with her mother’s daily medication, imitating a rabid dog, to setting Suzette on fire – it’s increasingly clear that there is something seriously wrong with their little girl.

Because what kind of child wants to kill their own mother? 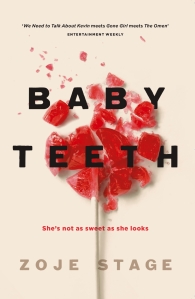 Thrillers and I have a complicated relationship. I don’t read them often, but when I do, my expectations are quite high. Baby Teeth, the debut novel by American author Zoje Stage, totally exceeded my expectations and then some. I sat gripped by this novel, barely putting it down, devouring it in one long night, pushing myself towards 2am in order to finish it. Once you begin it yourself, you’ll know exactly why I sacrificed sleep to this chilling novel.

There was a certain element of disbelief attached to this novel for me, although the deeper I got into it, the more credible the story became. Told in alternating perspectives, this story is downright creepy and utterly captivating. Hanna is seven years old, she doesn’t speak but extensive medical tests have proven there is nothing physiologically wrong with her. She is home schooled and cared for full time by her mother Suzette, an intelligent and creative woman who is sadly a prisoner to a debilitating illness, severe Chrohn’s disease. Hanna idolises her father and hates her mother. She hates her mother so much, that she deliberately hurts her when her father is not home. But her manipulations, mind games and physical attacks go beyond a naughty child, even beyond a child with special needs. Hanna is deeply disturbed, as bat shit crazy as they come, and my face was in a permanent shocked expression for the entirety of this novel.

At first, I found Hanna’s sections suspended my belief somewhat. While her actions were consistent with a seven year old, some of her thought processes seemed too adult. However, as the novel progressed, I became more convinced of the validity of these thoughts in relation to someone in her mental state. More light was cast on this later in the novel by Hanna’s child psychologist, and once you begin to regard her as nothing like a regular seven year old child, everything becomes more credible, and a whole lot more terrifying. Hanna’s brain is wired differently, she’s incapable of normal emotions, devoid of empathy. Even her love for her father is odd, more obsessive fantasy than real emotion. Hanna’s sections were written so cleverly, showing how much of a child she was in equal measure against the very un-childlike true nature she was harbouring.

“Daddy left early. Hanna had set the soft chimes of her alarm, because she and Marie-Anne had some thinking to do before Mommy woke up, and she heard him going down the stairs. It was a tremendously good sign and bode well for her plan: it might take time for Mommy to bleed to death.”

I’m not going to tell you who Marie-Anne is. But suffice to say, Marie-Anne in itself is evidence of the extent of Hanna’s flimsy grasp on reality. The most utterly terrifying thing about Hanna was how intelligent she was, smart enough to fool her father for so long, and smart enough to realise later on that she would need to fool others down the track as well.

I tried very hard initially to dislike Alex for how much Hanna had him wrapped around her little finger but I couldn’t maintain this at all. It was entirely credible that he would think the best of his daughter. His contact with her was limited to evenings between dinner and bed and weekends where he spent much time with her without Suzette, Hanna’s preferred and ideal situation. But as Hannah’s attempts on her mother’s life escalated, along with her displays of violent behaviour towards others, Alex was in a position to begin to doubt his daughter, a painful process that was well documented by Zoje Stage. Likewise, Suzette grappled with so much guilt over Hanna; had she inadvertently done something to Hanna in her formative years, had she not loved her enough, or loved her too much, had her own illness influenced her parenting of Hanna in a negative way; the guilt for Suzette was crushing and she was well past the point where she was capable of seeing herself as blameless. Her self-worth was shattered, it was deeply sad, and I admired Alex in his role as husband to Suzette, he was devoted to her and unwavering in this, despite his inner turmoil over Hanna.

In as much as Baby Teeth is a psychological thriller, it’s also a deeply moving domestic drama about two parents coming together at a crisis point within their family, recognising the need to unite, even if it means severing from their own daughter. There were some interesting themes explored around mental health, and how as parents, we need to consider what’s best for the child without mitigating real concerns for public safety. The question is raised, that if a child needed treatment for cancer, would a parent hesitate, yet with a mental illness, there is a reluctance to take the extreme pathway to committal in an institution. In many ways, Baby Teeth elevates itself out of the flash pan of entertainment that thrillers often fall into, asserting itself as a chilling, yet entirely thought provoking read on parenting a dangerous child. I reserved all judgement for Suzette and Alex; in fact, I’m still amazed Suzette didn’t leave, or worse, kill Hanna. Baby Teeth is a crackling good read, an incredible debut from an author to watch.

“She couldn’t tell him how the day had turned her thoughts toward the apocalyptic. The walls were crumbling. Hanna would shake the house until Suzette lay beneath the rubble, buried alive. And the word psychopath had come from Alex’s own lips, like maybe it was a thought he harboured, even as he defended his daughter. Maybe it was too late. Maybe no one could help Hanna. But what did that mean – for any of them?”

Thanks is extended to Penguin Random House Australia for providing me with a copy of Baby Teeth for review.