A moving and insightful family drama about three generations coming to terms with the family matriarch facing her final days.

At times like these families should be coming together, not tearing each other apart.

On her remote North Queensland cattle station, Ivy Dunmore is facing the end of her days. Increasingly frail, all she holds dear is threatened not just by crippling drought, but by jealousy and greed – and that’s from within her own family.

Can Felicity, who’s battling her own crisis as her fiftieth birthday approaches, protect her mother and reunite her family under the homestead’s faded iron roof? Or will sibling rivalries erupt and long-held secrets from the past break a family in crisis?

From award-winning Australian author Helene Young comes a story about family fractures and feuds in later life – and about loved ones being there for each other when it matters the most. 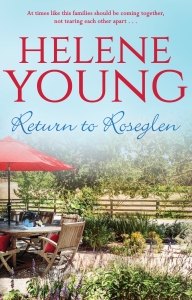 I feel incredibly lucky right now, our Australian women writers are producing so many excellent novels that I really am spoiled for choice. Return to Roseglen, the latest release by Helene Young, is no exception to this. It’s quite rare for me to read a nearly 400 page novel over the course of one afternoon and evening, but with Return to Roseglen, not only could I not put this novel down, there was no way I was going to bed without knowing how the story was going to pan out. It’s a brilliant novel, one of the best contemporary stories I have read in a long time.

Helene explores several issues relevant to older women within Return to Roseglen, the most pertinent of these being elder abuse. Right from the first page, my heart was being squeezed over Ivy’s predicament with her son Ken. As the novel progressed, and Ken’s liberties stretched into obvious abuse, I was so angry and overcome with sadness for Ivy.

“The thought that had been growing, building like a thunderhead, reared up again. She had become powerless. It was a terrifying feeling. It wasn’t just about leaving a home she loved, or losing her independence or any of the other things she complained about. It was far more elemental. She was terrified of no longer making decisions for herself, no longer controlling her world.”

Helene has a special way of giving an authentic voice to each of her characters. With Georgina and Felicity, I felt very much a part of their stories just as I did with Ivy. In particular, I found myself completely invested in Felicity’s challenges as an older woman facing divorce and the prospect of having to start over so late in life. I also really felt such a well of sympathy for Georgina with regards to her strained relationship with Ivy. Helene portrays the history between Ivy and Georgina with truth and understanding, with neither woman blameless nor completely at fault. Ella, Felicity’s daughter, completed the picture of the women in this family to perfection. The dynamics between each of the women were fresh and realistic, giving a true bird’s eye view of a regular family struggling to deal with major changes.

In the background of this story is a family secret that has the power to unleash a whole lot of pain, not only for the members of this family but also for the community they are a part of. The foreshadowing of this was woven neatly into the plot with precise reveals throughout. Helene deftly demonstrates with this storyline the devastating repercussions family obligation can have on not only those immediately affected, but on subsequent generations as well. I also appreciated the way Helene broached the issue of the roles of women on the land, challenging age old perceptions about women inheriting the land and the notion that women are farmer’s wives, not the farmers themselves. I’m seeing this issue crop up in rural fiction more and more and it’s a valid issue that deserves as much attention as it can get.

All in all, you would be hard pressed to find a better contemporary Australian story than Return to Roseglen. It’s an engaging family drama that taps into some serious and highly relevant social issues that so many people would be able to relate to. Be warned though, once you start reading, you’ll find it a challenge to stop!

Thanks is extended to Penguin Random House Australia for providing me with a copy of Return to Roseglen for review.

After 28 years as an airline captain in Australia, Helene Young has swapped the sky for the sea to go in search of adventure with her husband aboard their sailing catamaran. The rural and remote places she visits, along with the fascinating people she meets, provide boundless inspiration for her novels. Her strong interest in both social justice and the complexity of human nature shapes the themes she explores. Her six novels have won many awards including Romantic Book of the Year in Australia.