An evocative, multi-generational tale of a family haunted by the death of a young concubine in 1930s Malaysia.

In 1930s Malaya a sixteen-year-old girl, dreaming of marriage to her sweetheart, is sold as a concubine to a rich old man desperate for an heir. Trapped, and bullied by his spiteful wife, Yu Lan plans to escape with her baby son, despite knowing that they will pursue her to the ends of the earth.

Four generations later, her great-grandson, Nick, will return to Malaysia, looking for the truth behind the facade of a house cursed by the unhappy past. Nothing can prepare him for what he will find.

This exquisitely rich novel brings to life a vanished world – a world of abandoned ghost houses, inquisitive monkeys, smoky temples and a panoply of gods and demons. A world where a poor girl can be sold to fulfil a rich man’s dream. But though he can buy her body, he can never capture her soul, nor quench her spirit. 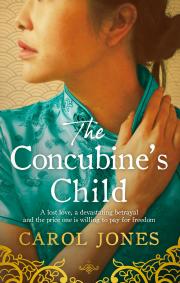 The Concubine’s Child is quite a magnificent story, I doubt I’ll be able to adequately convey how much I appreciated it. It’s a deeply immersive novel, one that takes you by the hand and leads you down into the depths of a culture so ancient, yet still so revered in the modern day, something I found both startling and comforting in equal measure.

This is a desperately sad story of a terribly unjust social system deeply entrenched in tradition that not only places women at the mercy of men, but also at the mercy of other women who are deemed more powerful than they are. The oppression was stifling and brutally unforgiving. The superstition was at times overwhelming, it put me in mind of 16th and 17th century Ireland with their ancient faerie superstitions. It must have been exhausting keeping up with all of the veneration and sacrifice needing to be made to the ancestors and the Gods. Constantly fearing retribution from the afterlife and consequently modifying your behaviour to fit in with subjective notions of right and wrong. It seems ridiculous to the modern world, and yet, there are many traditions and beliefs that still hold fast. Carol Jones brought this aspect of Malayan culture to life with vivid representation, it was truly fascinating, although, I kept wondering what actually happens to all of the food loaded up as offerings to the ancestors. Did it just sit there and rot? Maybe the monkeys were well versed at sneaking in and taking the goods! It’s one of those practical aspects of the mystical that tends to get in the way of me truly believing in anything like this.

When I think of the many women throughout time who have been subjected to the traditional social structures and cultural practices of ancient societies I tend to feel rather melancholic, and this novel is indeed filled with melancholy, in both eras within the story. However, it is by no means a depressingly sad read of a hopeless situation. Far from it. Carol Jones demonstrates exceptional skill as a writer throughout this novel, balancing authenticity with whimsy, and while the events, within both eras, imprint your heart with the sheer tragedy, this is one of those stories where you forgive the brutality of the author on account of the blinding beauty of the story as a whole. The Concubine’s Child is simply brilliant. The interconnectedness of both eras, the immersion into another culture, the authenticity of the characters, the vivid setting and atmospheric conjuring of the ancient merging with the modern; I was totally captivated by this novel, dread at the events unfolding not withstanding.

Perusal of the author notes at the end of the novel show just how much truth exists at the foundation of this story. Carol Jones is quite familiar with her setting and has used primary evidence to craft her historical sections; none of this surprised me given the quality of the story preceding these notes. While fundamentally this is a tale of revenge, it’s also a story about forgiveness and the ability to finally let go of the ties from the past. The Concubine’s Child is an outstanding novel of historical fiction that will satisfy a wide range of readers. I highly recommend it.

Thanks is extended to the author for providing me with a copy of The Concubine’s Child for review.

Born in Brisbane, Australia, Carol Jones taught English and Drama at secondary schools before working as an editor of children’s magazines. She is the author of several young adult novels as well as children’s non-fiction.

Since the passing of Queen Elizabeth II, there has been a multitude of magazine tributes popping up. I have been holding off buying any of them, despite my love of royal photo tributes, and I’m glad I did because this beautiful book that The Australian Women’s Weekly has brought out as a tribute to our late Queen’s life trumps them all. Simply titled, The Queen, it is a photo history of her life. There are articles peppered throughout, from the WW archives, but overall, it was the photos I bought this for and there are 200 glorious pages of them. It did not disappoint. I bought this book and am under no obligation to review it but I just wanted to share it here for any others who loved our Queen and would treasure a memorial like this. I bought my copy from Big W but I’d say it would be available anywhere you can buy The Australian Women’s Weekly from. Highly recommended! 👑👑👑👑👑
#newrelease ⭐⭐⭐⭐⭐ #bookreview up on the blog today 📚☕ *link in bio to read full review*
#currentlyreading #upcomingrelease The Three Lives of Alix St Pierre by @natashalesterauthor with thanks to @hachetteaus for the #bookreviewer copy 📚☕