All I can tell you is what I remember, in the words that I have.

Hayley tends to her bees and follows the rules in the only world she has ever known.

Until she witnesses the impossible: a drip from the ceiling.

A drip? It doesn’t make sense.

Yet she hears it, catches it. Tastes it.

Curiosity is a hook.

What starts as a drip leads to a lie, a death, a boy, a beast, and too many awful questions.

Hive is the first in a gripping two-book series by award-winning and international bestselling author A. J. Betts.

Refreshingly unique and highly absorbing, Hive by A.J. Betts is the first in a two part dystopian YA series about a community who live in a hexagonal world. YA and dystopian go hand in hand but they are not my usual reading material. I think I overdosed on it a few years back and it’s been a struggle to tolerate ever since. But I will tell you now, what a novel to break the drought with! Hive had me captivated from the beginning, I only wish it was one huge novel rather than a two part series, but I know YA doesn’t really work that way. I’ll certainly be looking out for the conclusion to this story because the ending of Hive has really left me hanging.

The world building in Hive is exceptionally good, so imaginative and so precise in its detailing. Basically, three hundred people live in this constructed hexagonal world. Day and night is created with phased artificial light and everything is indoors, even the outdoors. Zero population growth is carefully maintained through a meticulous process that ensures genetic integrity. Strict rules are in place and life mimics that of a religious sect. Five generations into this new world and no one remembers a time when life existed elsewhere. I expect book two will go into more detail about why Hive was created, although my initial impressions are because of global warming/environmental devastation. The whole set up kind of reminded me of Wall-E, that Disney movie about the little robot that was cleaning up a destroyed Earth while everyone else was living up in space. I loved how this hexagonal system was set up, it was so ingenious and I could actually envisage this as an authentic option for safe habitation.

However, as is the way with alternate worlds, no matter how ingenious the concept, as time goes on, oppression rears it head and someone always needs to lord it over everyone else. In Hive, the citizens are kept ignorant, only taught as children what ‘they need to know’, which is of course all propaganda geared to ensuring they tow the line at all times and develop a life sustaining fear of ‘sin’. Being diagnosed as ‘mad’ is an ever present threat as serious sanctions are put into place when this happens and no one ever returns to the general population cured. Hayley, the main character, suffers from the main symptom of madness, head pains, and she goes to great lengths to hide her symptoms. One day, she’s in the wrong place at the wrong time, a little haven she has discovered that eases her pains, and she witnesses something that sets her onto a path of questioning everything she has ever believed about her world. At first I felt that Hayley was incredibly naive, but this is in keeping with her sheltered existence. She’s actually quite intuitive and endlessly curious, two things that are not a bonus where she comes from. I liked how A.J. Betts picked apart Hayley’s careful existence, her increasing bewilderment and fear highlighting all that was wrong with her world and just how powerless she really was against the establishment. She was nothing more than a puppet lying in wait for them to tug on her strings. The abuse of power and state centred control within this world was harrowing to contemplate.

There are some serious issues underlying the story in Hive and it poses many questions for contemplation. I highly recommend this novel to readers of all ages. I was so impressed with this story, from the world building through to the characterisation, the engrossing plot and the unique premise. It’s a chilling little read, make no mistake, a cautionary tale of an alternate future. I’m really looking forward to Rogue, book two, and hope I don’t have to wait a whole year for it!

Thanks is extended to Pan Macmillan Australia for providing me with a copy of Hive for review.

A. J. Betts is an Australian author, speaker, teacher and cyclist and has a PhD on the topic of wonder, in life and in reading.

She has written three novels for young adults. Her third novel, Zac & Mia, won the 2012 Text Prize, the 2014 SCBWI Crystal Kite Award, and the 2014 Ethel Turner prize for young adults at the New South Wales Premier’s Literary Awards and was shortlisted for the 2014 Queensland Literary Award. Inspired by her work in a children’s hospital, Zac & Mia is available in 14 countries and has been developed into a TV series. It is nominated for six daytime Emmy Awards. 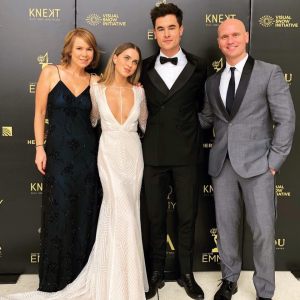 A. J. is originally from Queensland but has lived in Perth since 2004.