Congratulations Emily on winning the 2018 Australian/Vogel Literary Award. It’s a significant achievement and after reading The Yellow House, I can firmly attest to it being well deserved. I imagine it’s quite a whirlwind, winning and then seeing your manuscript as a book all in what seems to us, a matter of days. How has it been for you, becoming an award winning published author in one swoop?

Thank you! It’s been so fast paced that it’s only now (a month after The Yellow House was published) that I’ve been able to stop and have a moment to catch my breath. I knew I’d won for six months before the announcement was made, but wasn’t able to tell anyone I had won. It’s really lovely and such a relief to be able to talk about the book.

All stories begin somewhere and inspiration can stem from so many sources. Where did The Yellow House come from?

I’ve been interested in true crime and serial killers for as long as I can remember. It’s a fascinating genre that intrigues people for so many reasons, and I have always been drawn to the extreme nature of abject violence. The idea for The Yellow House stemmed from a real-life murder that I became obsessed with. In 2010 Ivan Milat’s grandnephew Matthew Milat murdered his childhood friend David Auchterlonie in the Belangalo State Forest—the same area where Ivan Milat committed the backpacker murders. He recorded the murder on a mobile phone and was arrested almost immediately afterwards. Obviously this is a terrible crime and Milat doesn’t deserve our sympathies, but what struck me about this particular murder was how Milat viewed what he’d done to be inevitable. He’s a Milat; it’s his birthright to emulate the crimes his family member committed in the past. I found that to be such a disturbing attitude to have, and it made me wonder what mythologies had been told to Milat when he was growing up. He’d been led to believe that he came from bad blood, which ultimately led to a violent and unnecessary death of a child.
Though The Yellow House is not a fictionalisation of this case, it sparked the question for me about what happens to the descendants of perpetrators. A number of other high-profile Australian cases occurred while I was writing The Yellow House, and which inspired it, if indirectly. What strikes me about these types of abject crimes—and serial crime in particular—is how ordinary they are. They are not committed by monsters, but by regular people who, for whatever reason, are compelled to commit crimes that are so unnatural and incomprehensible. Rather than the often gratuitous or sensationalised depictions we often see of serial murder, I wanted to interrogate the idea that these crimes exist in the realm of the mundane and are committed by otherwise unexceptional people. 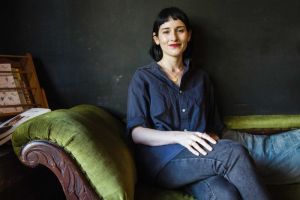 There are many heavy themes running through The Yellow House. In terms of setting these up and weaving them into the narrative, did you plan the entire story from beginning to end, or let it evolve naturally throughout the writing process? In terms of characters, were they already a firm picture in your mind before you started writing or did they develop a personality of their own as the story progressed?

Though I knew the book would be about the family of a deceased serial killer, I’m not much of a planner, so beyond the overall premise, I didn’t have a clear direction of the narrative. Because serial murder automatically sparks interesting and challenging questions about human nature and morality, I felt I had rich subject matter, which really propelled the narrative forward. As for the characters, Cub came to me fairly immediately and well formed. Her voice was strong right away, and I had a strong sense of her world-view and personality. Because it’s Cub’s lens that the reader sees the world through, then she dictated the direction of the story, as well as the other characters. I wanted Cub to have a twin brother who doesn’t like her that much, and an older brother who she idolises, and these characters really developed through their interactions with Cub, and how they fit into her story.

How far has your writing career evolved from when you first began to write to what it is today? Is this in line with your initial expectations? Are you balancing a different career with your writing? How do go about making time for your writing within limited hours?

It’s only after publishing a book that I’ve began to really consider myself as a writer. At the moment, I’m working as a sessional academic in Brisbane while I finish my PhD in creative writing. Currently, I don’t have a strict writing schedule, and try and fit a few hours in here and there whenever I can find the time. With The Yellow House, I made more of an effort to dedicate a concentrated period to writing it each day, and hope to manage the same with my second book.

What is on the horizon for Emily O’Grady?

I’m slowly nutting out an idea for my second novel. It’s early days, but it’s nice—and a little daunting—to begin to focus intensely on something new after working on The Yellow House for so long. I also have a couple of short stories in the works.

Even before I knew anything about Granddad Les, Wally and me sometimes dared each other to see how close to the knackery we could get. It was way out in the bottom paddock, and Dad had banned us from going further than the dam. Wally said it was because the whole paddock was haunted. He said he could see ghosts wisping in the grass like sheets blown from the washing line. But even then I knew for sure that was a lie. 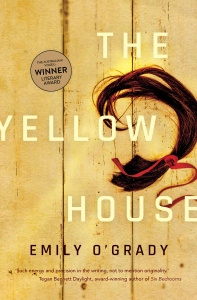 Ten-year-old Cub lives with her parents, older brother Cassie, and twin brother Wally on a lonely property bordering an abandoned cattle farm and knackery. Their lives are shadowed by the infamous actions of her Granddad Les in his yellow weatherboard house, just over the fence. Although Les died twelve years ago, his notoriety has grown in Cub’s lifetime and the local community have ostracised the whole family. When Cub’s estranged aunt Helena and cousin Tilly move next door into the yellow house, the secrets the family want to keep buried begin to bubble to the surface. And having been kept in the dark about her grandfather’s crimes, Cub is now forced to come to terms with her family’s murky history. The Yellow House is a powerful novel about loyalty and betrayal; about the legacies of violence and the possibilities of redemption.

The 2018 winner of the prestigious literary award for an unpublished manuscript to an author under the age of 35 – the Australian/Vogel’s Literary award.

Emily O’Grady was born in 1991 in Brisbane. Her fiction and poetry have appeared in, or are forthcoming in Review of Australian Fiction, Westerly, Australian Poetry Journal, The Lifted Brow, Kill Your Darlings, The Big Issue Fiction Edition and Award Winning Australian Writing. In 2012 she won the QUT Undergraduate Writing Prize, and in 2013 she won the QUT Postgraduate Writing Prize. In 2017 she placed second in the Rachel Funari Prize for Fiction, was shortlisted for the Queensland Premiers Young Publishers and Writers Award, and was longlisted for the Elizabeth Jolley Prize for Fiction. She co-edits Stilts Journal, and is currently completing a PhD in Creative Writing at Queensland University of Technology, where she also works as a Sessional Academic.

13 thoughts on “In Conversation with Emily O’Grady”