A breathtaking debut about love and war, and the battle to save a precious legacy

Each lace shawl begins and ends the same way – with a circle. Everything is connected with a thread as fine as gossamer, each life affected by what has come before it and what will come after.

1941, Estonia. As Stalin’s brutal Red Army crushes everything in its path, Katarina and her family survive only because their precious farm produce is needed to feed the occupying forces.

Fiercely partisan, Katarina battles to protect her grandmother’s precious legacy – the weaving of gossamer lace shawls stitched with intricate patterns that tell the stories passed down through generations.

While Katarina struggles to survive the daily oppression, another young woman is suffocating in her prison of privilege in Moscow. Yearning for freedom and to discover her beloved mother’s Baltic heritage, Lydia escapes to Estonia.

Facing the threat of invasion by Hitler’s encroaching Third Reich, Katarina and Lydia and two idealistic young soldiers, insurgents in the battle for their homeland, find themselves in a fight for life, liberty and love. 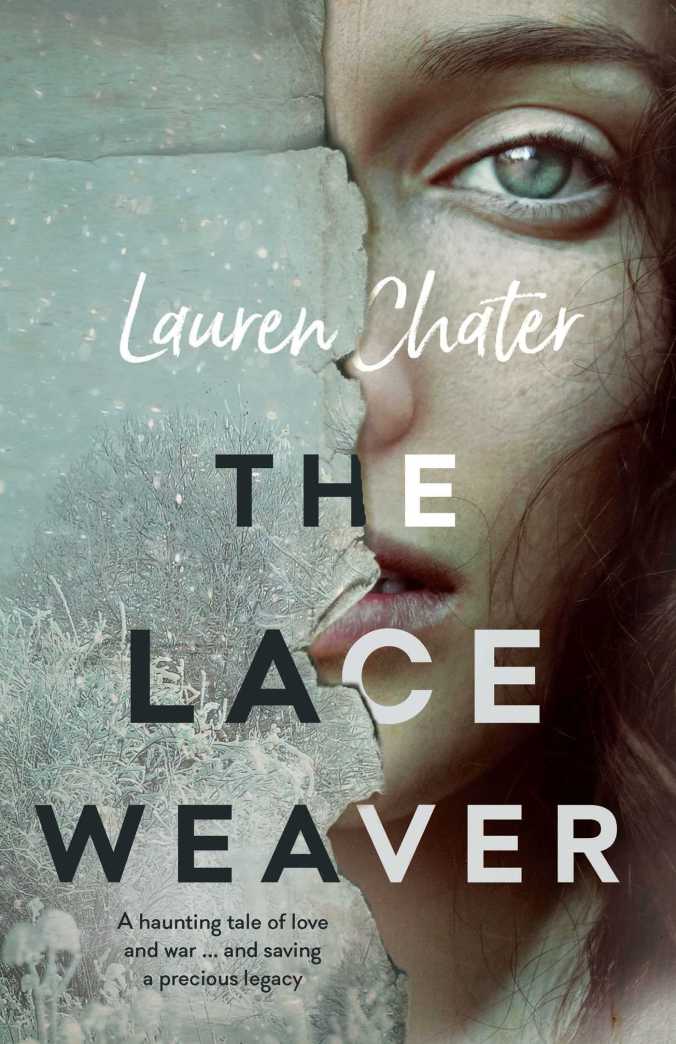 I am an avid reader of war time fiction. My grandfather’s family hailed from Belgium and I’ve written in the past about his life in the resistance and how that has resulted in this seemingly insatiable need I have within to read anything and everything I can about WWII. The thing with being widely read on a particular topic though, is that over time, unique stories become harder to uncover. So when you do find one, you instantly want to jump up and down and start waving said book in the air, shouting at everyone:

Consider yourself waved at and shouted at, simultaneously.

The Lace Weaver is utterly brilliant and Lauren Chater has such a beautifully refined style of writing. I fell in love with her words from the very first paragraph. Stories about the war in Eastern Europe are not all that common; the countries that were annexed by Russia and later absorbed into the USSR have such hidden histories, their culture all but obliterated and buried beneath genocide and communism. To read a novel like The Lace Weaver is such an honour; for an author to have meticulously researched a lost history, breathing gold dust onto it and bringing it to life—how lucky as readers we are. And once again, I am brought to a standstill as I contemplate how truly far reaching the horrors of WWII were. 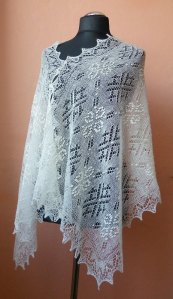 Cultural traditions are an endless source of interest to me, so I adored the way Lauren built this story around the Estonian tradition of lace knitting. About halfway through the novel, I had to Google Estonian lace shawls because I was certain that what I was envisaging was nowhere near as beautiful as the real thing. I couldn’t quite marry knitting with delicate lace. The knitting I knew was chunky and heavy. Goodness, the lace shawls I pored over online were divine! Just exquisite and so incredibly fine. Seeing these images changed the story for me, added a layer of consequence that made me appreciate why a woman would flee with a pair of knitting needles and a lace shawl stuffed somewhere on her person. Because the lace is a story, its pattern a family’s heritage, the folklore of a country that has been ground down under the heels of so many oppressors, yet still retained its cultural identity. This passage articulates this beautifully:

“I began to turn away.
My grandmother’s voice came back to me, loud and clear as if she was standing behind me, hidden in the shadows. Why do we make shawls? Not only for ourselves but to send our Estonian traditions out into the world.
Here was a shawl which had come back.
Before I could change my mind, before I could quieten the voice of warning screaming in my head, I seized her shoulder and dragged her outside with me, into the night.”

I love that so much: ‘Here was a shawl which had come back.’ History returned. The spirituality of Kati’s grandmother wolf combined with the lovely fairytales she was prone to telling, had me in a state of rapture over this novel. I felt such a keen awareness of the culture Lauren was putting forward, such an appreciation of the history being unearthed.

There was of course a fair amount of dread impeaching on my rapture, expected when you read a novel where you know the approaching Nazis are not the liberators the characters are hoping for. The loss of life, the brutality, the sheer bloody mindedness of war; I was overcome quite often. The capacity for survival, the bravery and belief in freedom—I find it hard to imagine having to fight for every minute of your existence, to gain one step forward only to face death once again, over and over. Rarely have I been so impacted by a story.

I’m going to leave you now with an extract, one the most moving scenes I have ever read in a novel, and one of the most beautiful—from this, you will get a sure sense of what you’re in for with The Lace Weaver. This is a story of love and survival, of enduring cultures and the importance of preserving the things we hold dear. It’s a novel that is destined to become a teaching text, its themes so exacting and monumental. I can’t wait to see what Lauren has in store for us next.

The Lace Weaver is published by Simon and Schuster Australia.

Lauren Chater writes historical fiction with a particular focus on women’s stories. After working in the media sector for many years, she turned her passion for reading and research into a professional pursuit. In 2014, she was the successful recipient of the Fiona McIntosh Commercial Fiction scholarship. In addition to writing fiction, she established The Well Read Cookie, a blog which celebrates her love of baking and literature. She lives in Sydney with her husband and two children. The Lace Weaver is her first novel, and she is currently working on her second, Gulliver’s Wife. See www.laurenchater.com and www.thewellreadcookie.com