How much will a young Parisian seamstress sacrifice to make her mark in the male-dominated world of 1940s New York fashion? From the bestselling author of A KISS FROM MR FITZGERALD and HER MOTHER’S SECRET.

1940 – Parisian seamstress Estella Bissette is forced to flee France as the Germans advance. She is bound for Manhattan with a few francs, one suitcase, her sewing machine and a dream: to have her own atelier.

2015 – Australian curator Fabienne Bissette journeys to the annual Met Gala for an exhibition of her beloved grandmother’s work – one of the world’s leading designers of ready-to-wear clothing. But as Fabienne learns more about her grandmother’s past, she uncovers a story of tragedy, heartbreak and secrets – and the sacrifices made for love.

Crossing generations, society’s boundaries and international turmoil, THE PARIS SEAMSTRESS is the beguiling, transporting story of the special relationship between a grandmother and her granddaughter as they attempt to heal the heartache of the past. 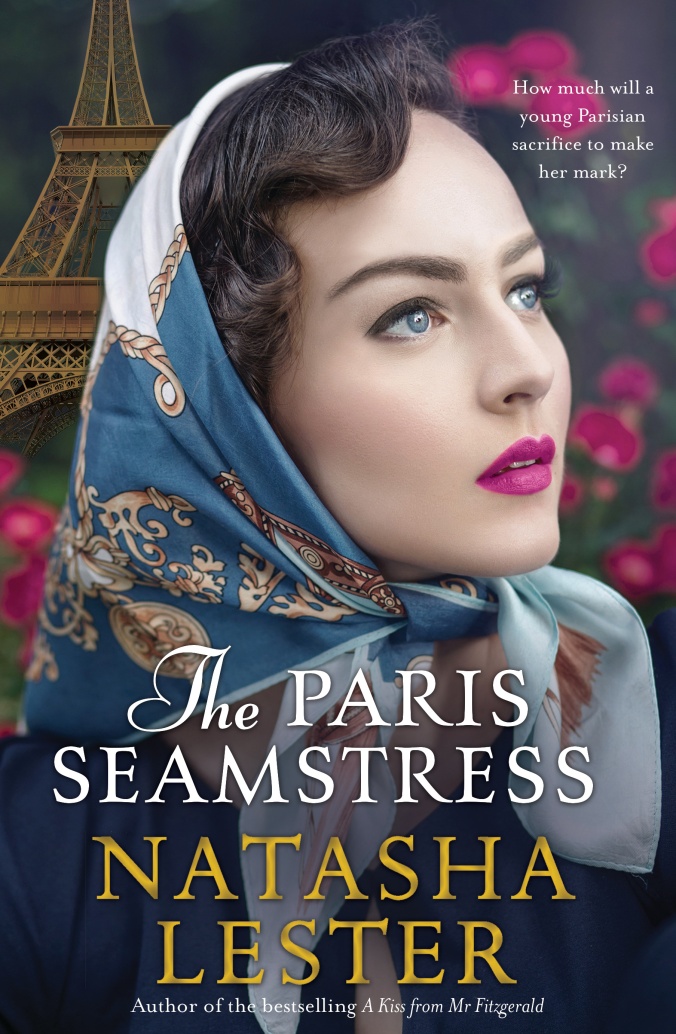 The Paris Seamstress is my favourite novel from Natasha Lester so far. I loved it, was completely captivated from start to finish, barely even registering the pages that were flying by. There’s a total immersion aspect to this novel that is all too rare. Natasha doesn’t just write about her chosen topic and set it in an arbitrary place; she plunges you into that world, visiting the places and experiencing as much of the life she’s writing about as possible, securing a level of authenticity only second to experiencing it yourself. You only need to follow Natasha on social media to appreciate the dedication she applies to this world building. While I was reading The Paris Seamstress this week, Natasha was posting research highlights from the novel, complete with photos and background information. It’s utterly fantastic and provides the reader with such a rich context to draw from. I really love that sharing of information between the author and reader that’s made possible through social media.

I will happily admit up front that I love fashion. My grandmother was a dressmaker, professionally in Europe before she married and then just piece work after that. She made the most amazing outfits, for herself as well as us, and also made a lot of bulk items for markets. Her sewing room was located in what most families use as a rumpus room nowadays, quite large, but she needed it to be to accommodate the huge table, multiple sewing machines, dressmaker dummies, and shelves upon shelves of patterns and fabrics and tools and threads—the list goes on. I learnt to sew from her and while I didn’t mind it, I preferred drawing designs and playing around with the fabric, leaving the actual sewing to Grandma, who was a natural and far better at it. I don’t sew at all now, barely even mend, and all of my clothes are off the rack. But the love is still there and I remember the feel of fabric, taut beneath your scissors, that crisp sound as you cut out the pieces ready for a new outfit. I think I might have liked Sam’s career, as a cutter, to be honest. I never had as much as enthusiasm for working on the project once the cutting was done. All of this of course would have greatly enhanced my enjoyment of The Paris Seamstress, but even so, I think this is a novel that anyone can enjoy, special interest in fashion or not. There’s so much in this novel to love and draw from, so much to weep over and celebrate; enjoying fashion is just a bonus.

The dual narrative appealed to me from the outset. It’s a technique in historical novels I favour. Natasha arranged this novel really well too, with clearly set out parts identifying which era and character you were presently reading. I always find this useful as it’s quite easy to get swept up in a historical saga and not notice the pages and chapters slipping through your fingers. Both Estella and Fabienne were incredible women, I didn’t favour either one over the other and enjoyed spending time with both of them equally. The story was weighted more to Estella, but I expected this given that Fabienne was uncovering her grandmother’s past alongside making some crossroads decisions of her own. But essentially, the story was Estella’s, and I enjoyed how Natasha made that work in with Fabienne’s sections. It was so engaging, right the way through. I couldn’t believe how lost in this novel I became.

Much of this story is heartbreaking, as stories about any war tend to be. When you deal in truth and history, this is an expected side effect. What I do want to commend Natasha for, is the lack of sugar coating. Some characters in this novel have some pretty awful things happen to them; likewise, there are awful characters within the story. Too often, this can come off as watered down, as though the author is holding back so as not to offend delicate sensibilities. I don’t mean to infer that there is any gratuitous content within this novel, far from it, but rather, there’s the sharp truth, uncovered, stripped back. I love that sort of honesty, that truth telling woven into fiction. It’s a rare talent to hit that delicate balance with such perfection, and it’s so important for success in historical fiction, particularly when you are reflecting upon and examining issues such as the representation of women throughout history. To return briefly to the research aspect of this novel, what an incredibly detailed story this is. Absolutely sublime. Natasha has such talent for weaving fact into her fiction, it’s a seamless immersion, you learn so much and you are constantly marvelling over the finite details imparted. For all this, the narrative is never overloaded or weighted down by facts. She really is a marvel.

The emotions wrought within me while reading The Paris Seamstress were wide reaching. I loved the characters, I loved the tension and the heart ache, the unveiling of the secrets, bit by bit, but not too stretched out. The twists and turns that I didn’t see coming, the things I hoped for that were realised. This is top shelf historical fiction, definitely a title you could give as a gift with ease. I am so excited for what Natasha will be writing next. Her novels are always so good, yet keep getting better—how is that possible?! This is a great title for book clubs and while I try to never make comparisons, I did feel that this novel was reminiscent of other great sagas I’ve read, particularly The Spoils of Time saga by the late Penny Vincenzi. Masterpieces themselves, so I hope you’ll forgive my sneaky comparison there!

Thanks is extended to Hachette Australia for providing me with a copy of The Paris Seamstress for review.

Natasha Lester worked as a marketing executive for cosmetic company L’Oreal, managing the Maybelline brand, before returning to university to study creative writing. She completed a Master of Creative Arts as well as her first novel, What Is Left Over, After, which won the T.A.G. Hungerford Award for Fiction. Her second novel, If I Should Lose You, was published in 2012, followed by A Kiss from Mr Fitzgerald in 2016 and Her Mother’s Secret in 2017. The Age described Natasha as “a remarkable Australian talent” and her work has been published in numerous anthologies and journals.

In her spare time Natasha loves to teach writing, is a sought after public speaker and can often be found playing dress-ups with her three children. She lives in Perth. For all the latest news from Natasha, visit www.natashalester.com.au, follow her on Twitter @Natasha_Lester, or Instagram (natashalesterauthor), or join the readers who have become Natasha’s friends on Facebook.