#1 New York Times bestselling author Candice Fox delivers a compulsive new crime thriller, which sees Ted Conkaffey once again teaming up with an unlikely partner – this time the father of the girl he was accused of abducting . . .

When former police detective Ted Conkaffey was wrongly accused of abducting thirteen-year-old Claire Bingley, he hoped the Queensland rainforest town of Crimson Lake would be a good place to disappear. But nowhere is safe from Claire’s devastated father.

Dale Bingley has a brutal revenge plan all worked out – and if Ted doesn’t help find the real abductor, he’ll be its first casualty.

Meanwhile, in a dark roadside hovel called the Barking Frog Inn, the bodies of two young bartenders lie on the beer-sodden floor. It’s Detective Inspector Pip Sweeney’s first homicide investigation – complicated by the arrival of private detective Amanda Pharrell to ‘assist’ on the case. Amanda’s conviction for murder a decade ago has left her with some odd behavioural traits, top-to-toe tatts – and a keen eye for killers.

For Ted and Amanda, the hunt for the truth will draw them into a violent dance with evil. Redemption is certainly on the cards – but it may well cost them their lives . . .

I thoroughly enjoyed the private detective duo of Ted Conkaffey and Amanda Pharrell last year in Crimson Lake, and this next instalment in the series, Redemption Point, proves that when it comes to writing crime thrillers, Candice Fox is quite simply, untouchable.

I am by no means a prolific crime fiction reader, but I do enjoy a good thriller and return to the genre regularly. I’ve read enough of them to know what makes a good plot and what falls flat, although I’ll freely admit that I almost never guess the outcome of a good plot twist, which no doubt enhances my enjoyment immensely. In Redemption Point, the plot is as twisted as a gnarled tree, but in hindsight, once all is revealed, you realise that Candice left plenty of clues along the way – but they were woven so neatly into the narrative that I never picked up on their significance at the time. Candice is good like that, leading you here and there and back around again. It makes for a fast paced and engaging read right the way through with plenty of shocked face moments.

Where this series really excels though, is in its character development and the relationships between these characters. Amanda Pharrell has quickly become a favourite of mine. So inappropriately honest and cheerful come hell or high water, she lifts every scene she’s in, along with the ones in which she’s only mentioned. The rhymes she makes up are hilarious, her quirks and habits endearing, if not inexplicable. Ted’s simple acceptance of her exactly as she is forms the basis of a strong connection between the two, a friendship that they both depend on in equal measure. Amanda has a way of forcing herself into the lives of those around her, even when they are resistant; a bit like a mouse squeezing into a house through a tiny crack. You give her an inch and she’ll take a mile. In Crimson Lake, she did this with Ted; in Redemption Point, she does it with Detective Inspector Pip Sweeney. I liked the connection developed between these two women. Amanda has many layers and more empathy than she is given credit for. And she’s wicked smart too!

Ted is a character who pushes the boundary of normal endurance. Entirely innocent of everything except being in the wrong place at the wrong time, his situation is a stunning example of trial by media in a never ending cycle. I really like Ted and feel deeply sorry for him. Candice has shaped his character well, and I’m keen to see where she takes him as the series progresses. Redemption Point sees Ted forced into a collaboration with the father of his alleged victim. This was so well done, razor sharp tension and a thick veil of mistrust on both sides made for some interesting interactions between the two. We also get to know Ted in his old home ground in this novel, which allowed for character growth opportunities only hinted at in the first instalment. Connections with old work colleagues, mobsters, his wife, and even his daughter – which made me cry! We got to know Ted a whole lot better in Redemption Point, and I loved every moment of it.

And then there’s the creepy side to this novel, the journal of Claire Bingley’s actual attacker, a paedophile named Kevin. His descriptions of his thoughts and actions gave me goosebumps, and not in a good way. But it was certainly convincing, that’s for sure.

I’m well and truly hooked on these characters now and hope for a series with many more instalments to come. Candice Fox is in a class of her own and I can’t stop raving about this series. If you haven’t read Crimson Lake, you could still read Redemption Point and know what’s going on, but of course the experience will be enhanced if you read them both in order.

Redemption Point is a great pick for book clubs!

Thanks is extended to Penguin Random House Australia for providing me with a copy of Redemption Point for review.

Hades, Candice Fox’s first novel, won the Ned Kelly Award for best debut in 2014 from the Australian Crime Writers Association. The sequel, Eden, won the Ned Kelly Award for best crime novel in 2015, making Candice only the second author to win these accolades back-to-back. Her third novel, Fall, was shortlisted for the 2016 Ned Kelly and Davitt awards. She is also the author of the bestselling Crimson Lake, which introduces a new series character, Ted Conkaffey.

In 2015 Candice began collaborating with James Patterson. Their first novel together, Never Never, set in the vast Australian outback, was a huge bestseller in Australia and went straight to number 1 on the New York Times bestseller list in the US and also to the top of the charts in the UK. The sequel, Fifty Fifty, will be released in August 2017. They have also co-written a prequel novella, Black & Blue, as part of the James Patterson BookShots series. 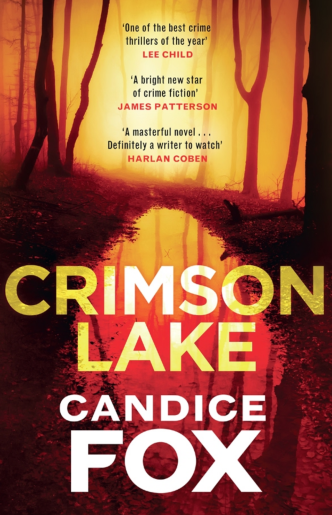 My review of Crimson Lake