About Revenge of the Corsairs:

Rescued after two years as a concubine in an Ottoman harem, former debutante Laura Cappleman faces a difficult journey back to normal life. As she travels to Palermo aboard Kit Hardacre’s ship, the Calliope, she is deeply traumatized – and pregnant by her kidnapper.

Laura rejects the emotional support of her long-time admirer, Calliope First Officer Elias Nash, and her cousin, Sophia, Kit’s wife. She withdraws into herself and her art. Finally, after giving birth, she decides to return to London, hoping to erase tormented memories.

Emir Selim Omar died on the day of Laura’s rescue, but his wickedness lives on in his third wife, Rabia, in whose household Laura was held. The ruthless widow may yet hold on to the power she wielded as mother to the Emir’s only male heir. However, as opportunists pick his empire apart, her child dies.

When Rabia learns Laura has given birth to a boy, the solution is obvious – the concubine is stolen property and so is the child sired by her late husband. She will take the boy and kill anyone in the way.

As Rabia’s assassins close in, Elias – both embraced and rejected by the damaged woman he loves, uncertain she will ever return, and alone in Palermo with the child he has given his name – must take the battle to the enemy. Otherwise, there may be nothing for Laura to come home to. 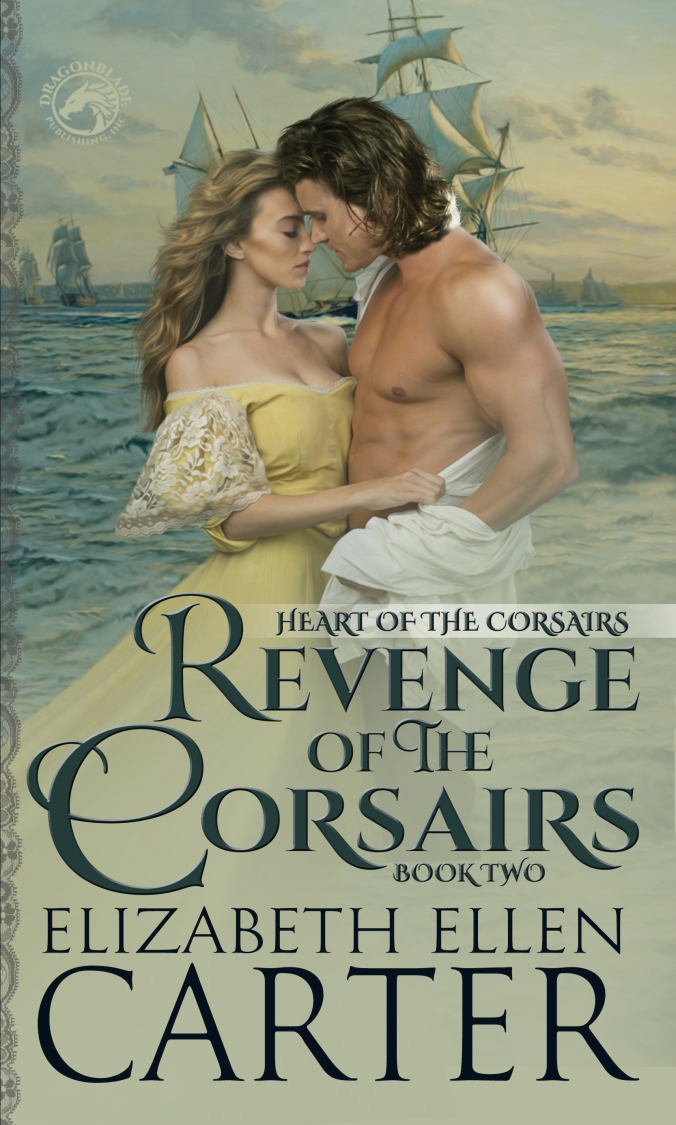 A Conversation About Pirates with Elizabeth Ellen Carter:

I love writing this series and I’m delighted there is still another book to come.

When most people think about pirates, they’re often thinking about the Elizabethan pirates and privateers that traversed between Europe and the new world.

Other pirates roamed the Mediterranean. The Barbary Coast pirates, state sanctioned by the Ottoman Empire who sponsored the client states of north Africa.

In fact, piracy had gotten so bad that the Americans were paying up to 10% of their GDP in tribute to release goods and sailors held hostage in the Mediterranean. It was Thomas Jefferson who refused to pay, saying that the money could better be used to build a navy and defend their merchant fleet.

And that was the origin of the US Marines.

If anyone is interested in a fascinating overview of Jefferson’s meeting with the Tunisian ambassador, this charmingly written article is well worth your time – https://www.monticello.org/site/research-and-collections/tunisian-envoy

Excerpt from Revenge of the Corsairs:

If he went uphill, Elias knew he would be overrun quickly. He turned and ran toward the woodland to the west. The thick growth of trees would provide some protection from the men on horseback.

Though hampered by the child in his arms, the unlaced boots slowing him even more, he dared not stop. He ran through a vale of fire with the villa ablaze to his right and Laura’s studio to the left.

Benjamin wailed, but Elias had no words to comfort him; all he could think of was the horror of being overrun, his son snatched from his arms, and a dying knowledge that he had failed the child and the woman he loved.

Lungs abused by smoke begged for air, but still he kept running. The sound of jangling bridles told him how close he was to death.

A cry of triumph sounded behind him. Elias gritted his teeth and waited for the swing of the scimitar that would separate his head from his shoulders.

Oh God, receive me in your arms. I beg you to protect my son.

Suddenly it was bright and hard to breathe, as though something had sucked the oxygen from the air, then –
Boom!

Elias’ ears blocked and popped. Benjamin screamed in pain. Over the smell of burning timber was the unmistakable odor of turpentine. Laura’s studio and its artist’s supplies had exploded as violently as an over-rammed cannon, sending bricks and shrapnel flying.

Horses screamed in panic, the steady beat of racing hooves now an uncontrolled trammeling as those riders still mounted tried to control their mounts.

Revenge of the Corsairs is available on Amazon:

#tgif #reading thanks to @harpercollinsaustralia for this #specialedition of The Seven Skins of Esther Wilding by @hollygoeslightly 🐚
Since the passing of Queen Elizabeth II, there has been a multitude of magazine tributes popping up. I have been holding off buying any of them, despite my love of royal photo tributes, and I’m glad I did because this beautiful book that The Australian Women’s Weekly has brought out as a tribute to our late Queen’s life trumps them all. Simply titled, The Queen, it is a photo history of her life. There are articles peppered throughout, from the WW archives, but overall, it was the photos I bought this for and there are 200 glorious pages of them. It did not disappoint. I bought this book and am under no obligation to review it but I just wanted to share it here for any others who loved our Queen and would treasure a memorial like this. I bought my copy from Big W but I’d say it would be available anywhere you can buy The Australian Women’s Weekly from. Highly recommended! 👑👑👑👑👑
#newrelease ⭐⭐⭐⭐⭐ #bookreview up on the blog today 📚☕ *link in bio to read full review*