Bodies of Light and Signs for Lost Children…

Bodies of Light is a deeply poignant tale of a psychologically tumultuous nineteenth century upbringing set in the atmospheric world of Pre-Raphaelitism and the early suffrage movement. Ally is intelligent, studious and engaged in an eternal – and losing – battle to gain her mother’s approval and affection. Her mother, Elizabeth, is a religious zealot, keener on feeding the poor and saving prostitutes than on embracing the challenges of motherhood. Even when Ally wins a scholarship and is accepted as one of the first female students to read medicine in London, it still doesn’t seem good enough. The first in a two-book sequence, Bodies of Light will propel Sarah Moss into the upper echelons of British novelists. It is a triumphant piece of historical fiction and a profoundly moving master class in characterisation.

Only weeks into their marriage, a young couple embark on a six-month period of separation. Tom Cavendish goes to Japan to build lighthouses and his wife Ally, Doctor Moberley-Cavendish, stays and works at the Truro asylum. As Ally plunges into the institutional politics of mental health, Tom navigates the social and professional nuances of late 19th century Japan. With her unique blend of emotional insight and intellectual profundity, Sarah Moss builds a novel in two parts from Falmouth to Tokyo, two maps of absence; from Manchester to Kyoto, two distinct but conjoined portraits of loneliness and determination.

An exquisite continuation of the story of Bodies of Light, Signs for Lost Children will amaze Sarah Moss’s many fans. 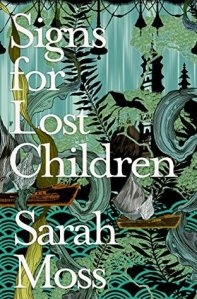 I enjoyed Bodies of Light from the first page through to the last. There is a poignant honesty to this story that at times left me bereft and deeply contemplative about the ideas explored and the themes raised by Sarah Moss.

I was so pleased upon finishing this novel to discover there was a sequel. Nearing the end, I felt I needed to slow down in order to savour the rest, as I was not yet ready to leave Ally. To be so intelligent yet born at the wrong time into the wrong family. It’s a devastating shame that so many women historically must have experienced. Despite these disadvantages, Ally persists, and her determination earned her my enduring admiration.

Religious fanaticism collides with child neglect and abuse in the most unsettling ways within Bodies of Light. While we are enlightened on Elizabeth’s history, we are not expected to excuse her ongoing behaviours. Elizabeth is a complex character, a woman who wants to save souls and pull prostitutes up out of their indignities, yet she is a terrible mother, blind to her own misdeeds within her own home, yet self-congratulated about her social welfare and community work.

This is historical fiction of the finest quality and I feel enlightened by having read this in a way I rarely do after reading a novel. Sarah Moss writes with such finesse and tackles the most difficult subjects with a subtlety that is truly full of impact. I look forward to reading her other novels.

Equally as stunning as it’s predecessor, Bodies of Light. I am so grateful for Signs for Lost Children; it completed Ally’s story to perfection.

The inclusion of Tom’s perspective worked so well, not only in terms of understanding his personal journey, but for gaining a greater appreciation for Ally and their mutual respect for each other. Ally’s perseverance to be a psychiatrist tending to those incarcerated in mental asylums was inspiring, however patient conditions and the circumstances under which she cared for them was heart breaking and dismaying. History is paved with human atrocity and Signs for Lost Children showcases one such example with determination as well as historical accuracy.

This entire novel was beautifully balanced between the two characters, creating a most perfect whole. I loved that internal push and pull Ally and Tom had; towards each other in genuine affection yet against the tide of their marriage as they each struggled to balance their relationship with their individual careers, two people a little out of step with the era and each other.

Bodies of Light and Signs for Lost Children are a must read for any lovers of quality historical fiction with a social conscience.

#currentlyreading One-night Stand by @simontaylorfunnyboy with thanks for the #bookreviewer copy @larrikinhouse #readaustralian #comedy #ausbookbloggers #bookstagram #bookbloggersofinstagram #readersofinstagram #readallthetime
#shelfie post! 📚 Here are the shelves I've set up so far in my #foreverhome 🏡 I have some larger, more 'fancy' shelves to come (they're on order) so setting up all the books is definitely a work in progress. The books on these shelves are all #bookreview #tbr and this is the first time I have been able to single shelve and actually see everything I have. Hoping this will lead to me being able to read a wider range, including some of these older titles.
#bookreview ⭐⭐⭐⭐ Half Life by @jilliancantor with thanks to @simonschusterau for the #bookreviewer copy