Today on Behind the Pen I have great pleasure in welcoming historical romance fiction author, Renee Dahlia.

In Pursuit of a Bluestocking, the second book in Renee Dahlia’s Bluestocking series released on 12 October 2017. The Bluestocking series follows three women who attend medical school together in Amsterdam in the 1880s, a decade after the first female graduate Dr Aletta Jacobs (https://en.wikipedia.org/wiki/Aletta_Jacobs). 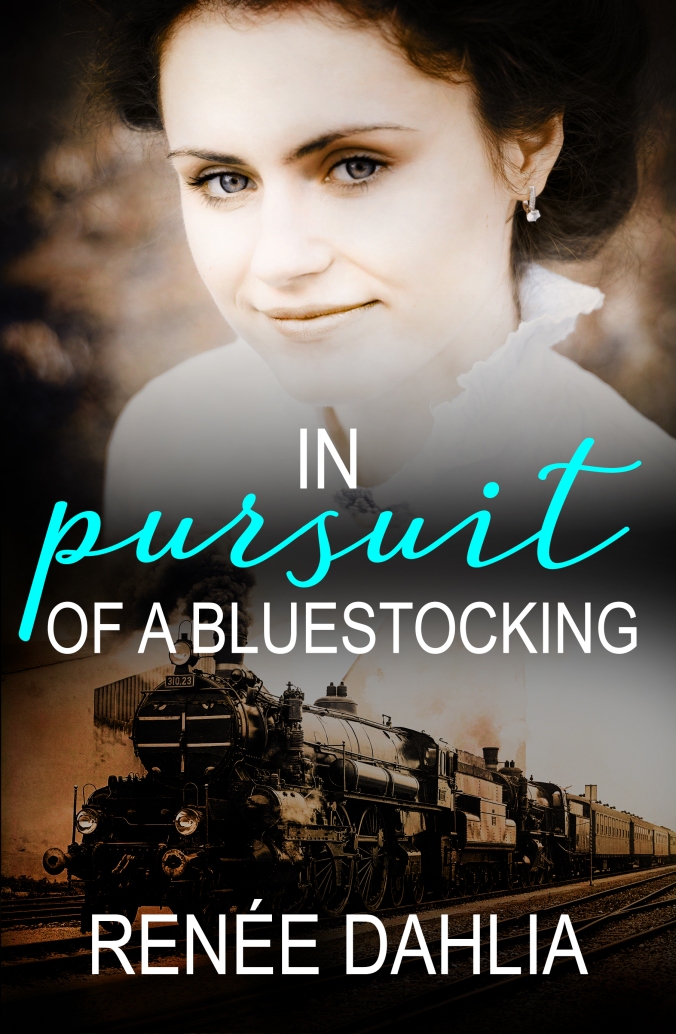 How would you best describe this novel to a new reader?

In Pursuit of a Bluestocking: When he goes hunting a thief, he never expects to catch a bluestocking…

This book is essentially a madcap train chase across Europe. It starts in Amsterdam when Marie’s fiancé is shot, and she meets the hero who helps her escape from the murderer. There are conmen, thieves, unusual historical objects, food, and of course, plenty of romance.

What other genre would you like to try your hand at writing and why?

Romance is my favourite genre to read, so my heart will always be there. Currently, I’m writing a contemporary novel set in Sydney, as well as doing edits on the third Bluestocking book. I write a lot of non-fiction in my day job, writing for two horse racing magazines, and there is a bookmaker from the 1890s who I’d love to write a fictionalised ‘based on a true story’ book about. He spent the early part of his career in Australia, creating a method of bookmaking that still is in use today. I’m also planning a romance based on his real life scandalous proposal and marriage.

My oldest sons are keen cricketers, and I wrote In Pursuit of a Bluestocking while watching them play over last summer. As long as I have my laptop, I can write anywhere, but there is something special about sitting under a gum tree in a warm Australian park with a light breeze and plenty of coffee.

Unlike many writers who say they were born wanting to write, I was in denial for a long time. I grew up in a family of readers and story-tellers; my father has three published non-fiction books, my sister writes sci-fi/fantasy, and that’s not counting the extended family. Rather than write, I did a degree in science, chosen in part because I had to write only one essay during my entire time of study! A decade after graduating, I had an opportunity to write for a horse racing magazine doing statistically based articles, and realised that I liked writing. Magazine writing is great for writing craft, as you must write to deadline and word counts. A couple of years ago, I decided, on a whim, to try my hand at writing fiction, mostly for the intellectual challenge. At the time, I didn’t expect to publish that book, but once it was done, publication was a natural step in the process. I pitched it at the RWA conference in 2016, where it was picked up by Escape Publishing and published as To Charm a Bluestocking in March 2017.

Are you balancing a different career with your writing? How do you go about making time for your writing within limited hours?

Yes, and with less sleep and no tv. I work three days a week for the Australian Stud Book, doing data analysis, and the other two working days are a balance of magazine writing, racing consulting work, and novel writing. At this stage in my fiction career, writing tends to be last on the to-do list, so I often write on weekends while watching kid’s sport, or in the evenings after everything else is done. I hardly ever watch tv, although I do have a soft spot for Michael Portillo’s Great Railway Journeys with his colourful wardrobe and his Bradshaw’s guide.

Can you share with us a vivid childhood memory?

When I was ten, we moved to a small country town. That summer, our family descended on the local library to borrow some books for our four week holiday in the timeshare beach house my parents had. Between the six of us, we borrowed 65 books. The look on the librarian’s face as she said, “No one can read that many books,” and my mother replying, “Just watch us,” will stay with me forever. And yes, between us, we read all the books, and most of us read nearly all of them!

What authors and types of books do you love the most?

Romance. For historical romance, I’ll always recommend Courtney Milan, Lisa Kleypas (especially her Hathaways series), and Tessa Dare. The best historical romance I’ve read this year is An Extraordinary Union by Alyssa Cole. A few contemporary romances I’ve enjoyed recently are Trust Me by Farrah Rochon, How to Bang a Billionaire by Alexis Hall, and the wonderful new release Hate to Want You by Alisha Rai.

In the first book in this series, To Charm a Bluestocking, the heroine of In Pursuit of a Bluestocking is happily engaged. Unfortunately, her fiancé is dull, and it takes his murder and betrayal for her to realise that she only said yes to him because she wanted to be wanted. I needed a reason for him to be murdered, and a family legend inspired the reason for his demise. My great (times a few) uncle was shot in the Battle of Shipka pass in 1877, the bullet removed, and made into a keepsake. I wrote about it for the Escape Publishing blog.

Harry Potter. My children love this series and have re-read it many times. They’ve cajoled me into reading it, and I’m really enjoying it. JK Rowling’s world building is outstanding, and from the craft point of view, the way she weaves backstory into each new book in the series is a great lesson for new writers.

What is your favourite scene from one of your novels and why?

Most of my books feature food, a hangover from my food blog (Work Eat Laugh Repeat) and this scene from In Pursuit of a Bluestocking has Marie and Gordon eating breakfast in a little bakery on the morning they arrive in Paris by train.

‘I’m afraid I know only a little about the peerage. We only ever visited my uncle’s estate. I certainly never had a season or anything like that.’
‘That’s probably a good thing,’ he said with another slight shift of his shoulders.
‘Surely the peerage is just like everyone else. A range of people who are clever, kind, practical or intelligent. A few who have tendencies towards selfishness,’ she said.
‘Are you this positive about everyone?’ he said. She shook her head once, a tiny, almost involuntary movement.
‘I’ve found it’s easier to deal with people if you can find some good in them. Often when people come into the university hospital, they are in pain and fractious. Being positive helps calm them down so we can treat them.’
‘I bet it’s not as simple as that,’ he said. She was saved from having to answer as their breakfast arrived. Her croissant smelled divine with perfect brown flaky pastry and melted butter. The rich bitter aroma of coffee made her mouth water, and she lifted the cup up for a tiny sip of the boiling hot liquid. The steaming coffee burnt the tip of her tongue and she almost dropped the cup. She pressed her tongue to the back of her teeth.
‘Hot?’ asked Gordon. She nodded. She looked over at his meal to see a large plate of poached eggs on flat cakes with bacon and a creamy sauce. A few leaves of parsley garnished the top. She picked up her croissant and bit into it. Pastry crumbs broke off and fluttered down to the table. A few landed on the front of her dress and one fell inconveniently down into her cleavage. She placed the croissant back on its plate and brushed down her dress. Little crumbs of sharp pastry points jabbed into her skin. Ah, croissants—so delicious, but so impractical to eat. She flicked a glance up at Gordon and her eyes stayed there. Transfixed by the hunger in his face. All her earlier nervousness rushed away, replaced by a growing awareness on her skin. His masculine lips parted and the tip of his tongue rested between them. As if he wanted to lick that crumb out of her cleavage. Her skin burned with the thought of it; fire breathed across her as if his tongue already licked at her skin. She dropped her gaze down to that tiny crumb nestled at the neckline of her dress and plucked it out with trembling fingers. Shots of sensation raced along her skin where her own finger touched her. If he could cause this much heat with just his eyes, imagine. No. She shook her head and swallowed.