A moving, sweet and uplifting novel of love, grief and the heartache of letting go, from a wonderful new Australian author.

Cate Carlton has recently died, yet she is able to linger on, watching her three young children and her husband as they come to terms with their life without her on their rural horse property. As the months pass and her children grow, they cope in different ways, drawn closer and pulled apart by their shared loss. And all Cate can do is watch on helplessly, seeing their grief, how much they miss her and how – heartbreakingly – they begin to heal. Gradually unfolding to reveal Cate’s life, her marriage, and the unhappy secret she shared with one of her children, In the Quiet is compelling, simple, tender, true – heartbreaking and uplifting in equal measure. 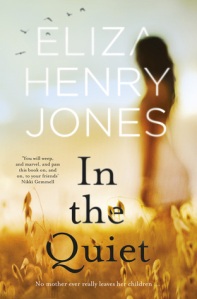 Grief and guilt intermingle in this quietly beautiful debut novel by Eliza Henry-Jones. The story gently unfolds in pieces that take the reader from the present through to the past and back again in a seamless arrangement.

Uniquely narrated, with heartfelt prose, this is a novel to linger with, to savour, and ultimately, to weep over.

I am genuinely stunned at the writing talent Eliza exhibits for someone so young. Her deft prose ensures that her future novels will be an auto-buy for me.

Highly recommended but best served with a side of tissues. 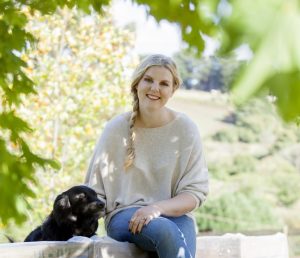 Eliza Henry-Jones is an author based on a little farm in the Yarra Valley of Victoria.

Her debut novel In the Quiet was published in 2015 as part of a three book deal with HarperCollins Australia and is now out in the US through Harper360. It was shortlisted for the Readings Prize for New Australian Fiction, the NSW Premier’s Literary Awards and was longlisted in the Indie Awards and ABIA Awards. Her second novel Ache was released in June.

Eliza has recently signed an additional two book deal with HarperCollins Australia for two works for younger readers. Her first Young Adult novel P is for Pearl will be published in March, 2018.

Eliza has qualifications in English, Psychology and grief, loss and trauma counselling. She has also completed an honours thesis exploring representations of bushfire trauma in fiction. Her work has been published widely, appearing in places such as The Guardian, The Age, Southerly, Island, The Big Issue and Daily Life.

In 2012, Eliza was a young Writer-in-Residence at the Katharine Susannah Prichard Writers’ Centre in WA and in 2015 undertook a residential fellowship at Varuna in NSW.