Welcome to Behind the Pen. Today I have the pleasure in welcoming Historical Romance author Elizabeth Ellen Carter to talk about her ‘captivating’ new novel, Captive of the Corsairs.

Can you tell us about Captive of the Corsairs? I believe it’s the first in a trilogy. What’s in store for us with this series?
Captive of the Corsairs is an adventure romance set during the early 19th century in the dying days of the Barbary Coast pirates. The heroes in each of the three stories has been personally affected by the slave trade which was rife in the region until 1830 when the French colonised North Africa.
I’m very excited with each of the stories in the Heart of the Corsairs series. The heroes and heroines are very different and the challenges they face to get to their happily ever after are so unique.
Captive of the Corsairs was the first book in the series. The hero, Kit Hardacre is a man hell-bent on revenge after suffering for years as a slave. He is saved from utter destruction and ruin by Sophia Green who learns about the barbarous Ottoman-sponsored pirates first hand.
Revenge of the Corsairs is the second book slated for a release later this year. The heroine, Laura Cappleman is Sophia’s cousin. Both women have undergone an ordeal but Laura has to mature and find her own path to recovery which she does with the hero Elias Nash, the first officer on Kit Hardacre’s ship the Calliope. But before they get to their happily ever after, they have to defeat an enemy from an unexpected quarter.
Shadow of the Corsairs is the third book, but it’s actually a prequel. Jonathan Afua, the son of a wealthy Ethiopian Jewish family who is the Calliope’s navigator and Morwenna Gambino, a business woman who provides cover and material support for the Calliope’s operations, are our couple. They were married in Captive of the Corsairs, but I want to tell their back story and the struggles they face culturally. Also we see a self-destructive side to Kit Hardacre which Elias and Jonathan try hard to manage. Shadow of the Corsairs is a 2018 release.

What is your favourite character from Captive of the Corsairs and why?
I have a real fondness for Kit Hardacre. The face he presents to the world – arrogant, self-assured, ostentatious – is largely a mask. His brutal treatment and abuse he received as a child has had a strong psychological impact on him. He tries to find meaning in the pain by rescuing people who themselves had been enslaved. He is caught between justice and vengeance and sometimes loses his way between them. It is only Sophia who can ground him.

What is your favourite scene from Captive of the Corsairs and why?
Oh my goodness, there are so many! I think one of my favourites is the first meeting. Sophia is on a mission to rescue her cousin from a lecherous suitor and Kit tags along to help, much to her chagrin. He’s immediately smitten by her dedication to her cousin and her bravery. I think that perhaps Kit recognises a fellow ‘rescuer’ in Sophia.
Another favourite scene is the first kiss. It’s both tender and emotional. 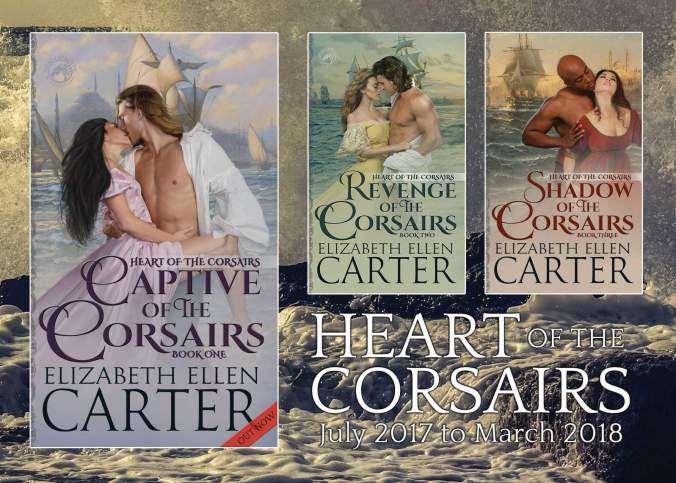 How far has your writing career evolved from when you first began to write to what it is today? Is this in line with your initial expectations?
I barely recognise the writer I was five years ago. I can approach a story today with a greater confidence regarding the structure, the themes, the subplots and the subtext.
It’s like any skill, the more you practice it, the easier it is to add complexity and depth to the plot and the characterisations.

Are you balancing a different career with your writing? How do you go about making time for your writing within limited hours?
I still work full time, so I have to mete out my writing time carefully. I spend a lot of time away from my desk thinking about the plot and dialogue then sit down in a two hour burst and put all of that down on paper – well, that’s the theory anyway…

What other genre would you like to try your hand at writing and why?
I’d like to try a bit of sci-fi – there is a lot of similarity between historical and sci-fi in that there’s a lot of world building that goes on. I tried my hand at a sci-fi short story for the Romance Writers of Australia Little Gems anthology. It didn’t make the cut, but I’ve put it on my Wattpad account for people to read.

What do you like to do when you’re not writing?
Spending plenty of time with my long-suffering husband!

What book is currently on your bedside table
An anthology of Father Brown Mysteries by GK Chesterton.

Can you share with us a vivid childhood memory?
Going down to Pacific Fair Shopping Centre (which was the largest shopping centre in the southern hemisphere at the time) with my grandparents and going into the book store to see if they had another Nancy Drew Mystery in stock. Each fortnight my grandparents would buy me a new book.

If you could trade places for a week with any other person, living or dead, real or fiction, who would it be and why?
Hmmm. I think it might have to be Jeff Bezos, the founder of Amazon, so I could squander some of his millions to buy all the books I want.

Thanks Elizabeth for joining us today for Behind the Pen. It’s always a pleasure having a chat with you. I recently read Captive of the Corsairs and thoroughly enjoyed it. If you missed my review, you can catch up on it here.

To find out more about Elizabeth and her fabulous historical novels, visit her website: Elizabeth Ellen Carter Love’s Great Adventure.

2 thoughts on “Behind the Pen: Elizabeth Ellen Carter”