Captive of the Corsairs…

Bluestocking Sophia Green’s future is uncertain. Orphaned as a child and raised by the wealthy Cappleman family, she has become the companion to her attractive younger cousin, Laura, while harboring to her breast an unrequited love for Laura’s diffident brother.

Sea captain Kit Hardacre’s past is a mystery – even to him. Kidnapped by Barbary Coast pirates at the age of 10, he does not remember his parents or even his real name. All he recalls are things he would rather forget.

When Laura’s reputation is threatened by a scandal, Sophia suggests weathering the storm in Sicily with their elderly uncle, a prominent archaeologist.

Their passage to Palermo is aboard Hardacre’s ship, but the Calliope, like its captain, is not all it seems. Both have only one mission – to rid the world of the evil pirate slaver Kaddouri or die in the attempt.

Initially disdainful of the captain’s devil-may-care attitude, Sophia can’t deny a growing attraction. And Kit begins to see in her a woman who could help him forget the horrors of his past.

Sophia allows herself to be drawn into the shallows of Kit’s world, but when the naive misjudgment of her cousins sees Laura abducted, Sophia is dragged into dangerous depths that could cost her life or her sanity in a living hell. 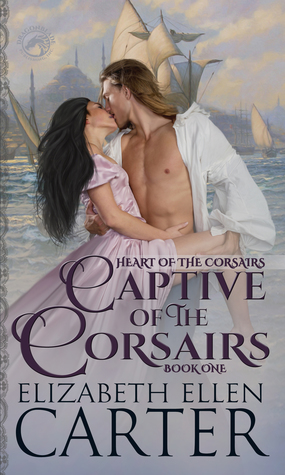 I’ve become quite a fan of Elizabeth Ellen Carter in recent years. She has a talent for combining adventure in far flung places with smouldering romance. Plus, her stories are all set within an historical era and locale that I’ve usually never come across before, making each adventure an enlightening experience all round. Each of her novels has a serious issue at its core and she orbits the story around it to perfection. Meticulously researched yet never overly laden with detail, her novels are an escapist treat and I look forward to each new release.

Captive of the Corsairs was everything I’ve come to expect from Elizabeth and it had me ‘captivated’ from start through to finish. Sophia was an excellent heroine: smart, self aware, not a hint of the weeping willowy damsel about her at all. And Kit, well, he was what every hero should be. Fiercely driven by his demons, he was witty, brave, strategic, and completely undone by Sophia. What I loved most about their romance was the way Kit was attracted initially to Sophia because of her intelligence, rather than her looks. An appreciation for brains over beauty is valuable within any era, historical or present, and a mutual respect for intelligence forming the basis of a relationship is a very fine thing to have portrayed in a romance novel.

At the heart of this story is a fight against kidnapping for slavery. Elizabeth doesn’t shy away from telling it like it is, which is one of the reasons why I like her novels so much. They’re an honest historical account which have a great deal of research evidenced throughout the story. I enjoyed the historical anecdotes woven into the narrative; they gave an authenticity to Captive of the Corsairs that firmly grounded it within its setting.

I have to say that Sophia’s cousins were idiotic fools. So rude to Sophia at times, they really didn’t deserve her loyalty. They were probably fairly typical though of the era and their position within society. I really felt for Sophia, the poor orphaned cousin, at the mercy of the generosity of others. And despite her contributions to her uncle’s work, as a woman she couldn’t receive any credit. Thank goodness there are some things we have improved on over the centuries!

If you enjoy a book series then you’ll be pleased to know that Captive of the Corsairs is a ‘book one’, so there is more to come for these characters. I am certainly pleased about this and will be first in line for a copy of the next instalment!

Thanks is extended to Elizabeth Ellen Carter for providing me with a copy of Captive of the Corsairs for review.

Captive of the Corsairs is book 45 in my 2017 Australian Women Writers Challenge.