Today I welcome one of my favourites to the blog for a first ever guest post, Australian Historical Fiction Author, Kim Kelly.

Kim is celebrating 10 years since the publication of her first novel, Black Diamonds. Beautifully repackaged, Black Diamonds is being relaunched on 1 July 2017, along with all her earlier novels, This Red Earth, The Blue Mile, and Paper Daisies.

‘You’ve set the story where?’ That was the general head-scratching reaction I received when I began to confess to friends and colleagues that I’d written a novel – a novel set in Lithgow.

For those unaware, Lithgow is an old coal town on the bleak side of the Blue Mountains in New South Wales, famous these days for bitterly cold winters and a high youth unemployment rate. But to me, Lithgow was a place of breathtaking natural beauty and fascinating history, just down the hill from my home at the time, in Blackheath. It was a place that had seemed to dare me one sleety morning, while watching my then small kids play soccer there in the valley at a ridiculous hour, to finally begin to write out my heart in pages.

As a forgotten, neglected town, it also seemed the perfect place to write a story I hoped would rouse my fellow Australians from our collective amnesia about involving ourselves in foreign wars. As we’d just signed up with the Coalition of the Willing in the War on Terror, my story would, in response, tell some truths about the First World War, the supposed war to end all wars – and one throughout which little old Lithgow had been pivotal. Lithgow was not only a major supplier of coal but its ironworks, small arms factory and woollen mills had equipped our troops overseas. Indeed, the German Army would never have been vanquished had it not been for Lithgow!
I was going to use all this as a backdrop to the greatest love story ever told, so that then, of course, my humble Lithgow tale would change the world.

Unsurprisingly, that didn’t happen. But it did begin my writing career. Black Diamonds, that humble Lithgow tale, was published in 2007 and I haven’t stopped writing stories about love, history and politics set in obscure Australian locations ever since.

As well received as Black Diamonds was, though, it was only in print for a nanosecond. It’s the quick or the dead in publishing, and within a year, you couldn’t buy a print copy anywhere.
‘Oh well,’ I shrugged. ‘Them’s the breaks.’ As a hardened book editor, I knew that all too well.

I was also preoccupied by a ton-weight of greater sorrows at the time: my mum had died suddenly during the writing of the novel; my marriage of fourteen years broke-up (mercifully) on its publication; and I lost my dad to the ravages of dementia soon after. Given all this, I hardly registered I’d even achieved novelist status.

But the question from readers, ‘Where can I get a copy of Black Diamonds?’ would routinely break through the fog.
‘Dunno,’ I’d say, more concerned that I was having a ton-weight of difficulty writing my second novel – no prizes for guessing why.

That second novel was a monster, in every sense, and it kept me captive for almost three years before the sunshine returned to my life unexpectedly in the form of a bloke called Deano. It was shift-in-narrative-direction at first sight. I binned the monster as bad news then and wrote a novel inspired by Deano instead – This Red Earth – a tale of a geologist trapped in New Guinea during the Japanese invasion of World War Two and the blossoming writer who loves him to bits. 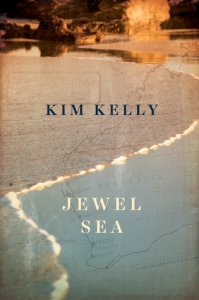 Meanwhile, the second-hand market for Black Diamonds was going nuts. At its height in May this year, you could pick up a pre-loved copy for $134.71 – US dollars. That’s almost as insane as my record in publishing and family drama.

By this time, my first three novels were out of print (despite two of them having sold well and despite my growing readership and critical recognition – go figure) and the question was morphing into, ‘Where can I get a copy of This Red Earth?’ and ‘Why is The Blue Mile coming up as unavailable – wasn’t it only published last week?’

Yes. It began to seem a little more than silly that half my backlist was off the shelves – especially since all my novels are pieces of a kaleidoscopic whole. I wasn’t sure what to do about it, though. Could I self-publish them? I didn’t know the first thing about that side of publishing. By one amazing stroke of luck, a savvy friend helped me get my rights back on Black Diamonds, This Red Earth, The Blue Mile, and Paper Daisies too, yet still I didn’t know what I might do with them.

If there’s one good thing about working in the sausage factory that is traditional publishing, though, it’s that you get to meet a lot of clever book people. One such confrere was the journalist, novelist and general brain bucket, John Birmingham. I hadn’t seen John for at least fifteen years, and last at a book launch whose details are hazy but for a vague recollection of me dancing alone on a restaurant table. I think I asked him if I could borrow his phone to let the babysitter know I’d be late and shabby on return, but now, I needed to ask him how he’d made his shift from traditional to independent publishing – as he had just done, and in some style.

Good man that he is, John recommended I get in touch with a fellow called Joel Naoum of Critical Mass publishing consultancy, himself a refugee from the old ways, and the rest is an historical novelist’s lovely dream of discovery come true.
Working with Joel, as well as the inside-and-out gorgeous book designer Alissa Dinallo, has pushed my understanding of the possible in every wonderful way. Not only are my books about to re-enter the world with beautiful new jackets that better fit their shapes beneath, but the whole process has caused me to look at my work with fresh eyes.

Today, thrilled from toes to fingertips, it feels as though I am finally free to be proud of my writing achievements, uncluttered by any sadness or the mysterious decisions of others. Best of all, my books will never be forgotten again – especially not by me.

And, as serendipity would have it, Black Diamonds steps back into the limelight right on time for her tenth anniversary. There’ll be some celebrating in Lithgow to come, my wordy there will. As well as an answer to that question: ‘When can I get a copy…?’

You can get one come the first of July. Party time!

To celebrate this milestone anniversary, Kim is giving Theresa Smith Writes readers the chance to win an ebook copy of my favourite, Paper Daisies. To enter, we want to know what your favourite era in Australian History is and why.

Keep an eye out over the next few days for my review on Paper Daisies.

You can read my review of Wild Chicory here.

To preorder ebooks from your favourite retailers, follow the links from here: Kim Kelly – Pronoun